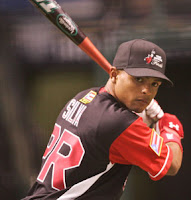 Juan Silva is another intriguing prospect that the Reds nabbed in the 2009 draft. It's obviously too early to make any kind of real determination, but the Reds 2009 draft is shaping up nicely. They selected a nice mix of pitchers and potential impact position players, one of which was Juan Silva.

The Reds selected Silva with the 239th overall pick in the 8th round of the 2009 draft out of the Puerto Rico Baseball Academy, which is the same school that produced fellow Reds prospect Alexis Oliveras. The Reds have focused heavily on Puerto Rico as of late, which also netted them Neftali Soto.

Silva has a strong build and good athleticism, which gives him a nice set of tools. In addition, he seems to already be figuring out how to translate those tools into baseball specific skills, which gives him a leg up on other prospects his age.

Upon signing his first professional contract, the Reds sent Silva to the rookie Gulf Coast League, where, as an 18-year old, he made quick work of the competition.

Overall, not bad numbers for an 18-year old getting his first taste of the professional game. He demonstrated a nice, well-rounded offensive game. He drew his fair share of walks, flashed some power, and showed some speed. In addition, digging a little deeper may reveal Silva's performance to be even a bit stronger than it was at first glance.

In sum, it was a pretty impressive professional debut for Silva.

Here is a look at Juan Silva in action (unfortunately, there are a number of ads preceding this video, but you can bypass them by skipping ahead to the 45 second mark):

Silva utilizes a fairly well-balanced, controlled swing and gets good extension on his swing. He starts with a hand position at shoulder height and draws them back slightly into hitting position when the pitcher delivers the ball. His stance is slightly wider than shoulder width and he starts with his back elbow up. He has a slight uppercut to his swing and possesses good bat speed. He doesn't have any wasted motion in his swing and his swing path seems pretty quick to the ball. His swing is fluid and flowing, but doesn't seem to suffer from the excessive length that plagues the swings of many sweet swinging lefties.

One potential area of concern is Silva's stride and it's potential 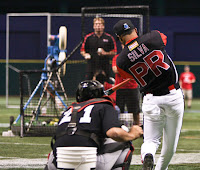 impact on his hip rotation. Silva's stride consists of drawing his foot back slightly and towards the plate for a toe-tap before moving it forward for a normal length stride. However, when his stride foot lands his toe is frequently pointed towards third base or even the shortstop. This open foot position results in a lower degree of hip rotation, as it requires opening up sooner than normal. Firing the hips generates power in the swing, so a reduction in hip rotation could result in a loss of power. By pointing his stride foot towards 3b/ss Silva's swing may be bleeding a bit of power. In addition, at times the combination of his open toed stride and hip rotation results in Silva being off-balance on his follow-through and falling towards the plate with his back leg. Fortunately, that is something of a minor flaw and one that would not be too difficult to correct. Simply closing up his plant foot could help him stay square to the ball longer, ensure that he doesn't spin off the ball too soon, and, as a result, improve his balance on his follow-through as well.

Overall, Silva has a smooth, fundamentally sound swing that should serve him well as he progresses up the ranks.

For the Gulf Coast League Reds, Silva played 35 games in centerfield, but also shifted over to rightfield for 8 games. The sample size is too small to draw any definitive conclusions on Silva's defense, but he moves well in the field and his overall athleticism will serve him well whether he plays center or slides over to a corner spot. He also possesses good arm strength, having been clocked at 88 mph on the radar gun, which will serve him well in either center or right. Obviously, he'll have more positional value if he can play center and the Reds will continue to run him out there unless he proves incapable of handling it.

Silva is most definitely one to watch. He not only has a nice set of tools, but his approach at the plate allows him to translate those tools into offensive production. If things break right for Silva, then he could have a well-rounded offensive game to go along with solid defense and good positional value. He's still young and has a long way to travel on the development curve, but his professional debut illustrates that he brings a bit more polish and significantly more on-base skills to the table than most prospects his age. His swing mechanics are fundamentally sound and illustrate the reason for his early professional success in the rookie league.

Silva's approach should allow him to get the most out of his diverse set of tools, which for now is good enough to land him at #18 on the list.
Posted by Lark11 at 9:32 PM