Rob Neyer once wondered whether there was a "statute of limitations on an opinion." Neyer was asking the question in regards to Kris Benson, who continually earned big MLB money despite poor production by living off his status as the #1 overall pick in the draft. In the near future, we may be asking a similar question about Devin Mesoraco. But...not just yet.

Mesoraco, who has really struggled in adapting to the professional game, is still worthy of mention because of his tools. His reputation heading into the draft was as a fast rising prospect due in part to five solid tools and good makeup. At this point, he hasn't lived up to his draft position and he no longer looks like a solid five-tool guy, but there's still reason for hope.

The Reds selected Mesoraco with the 15th overall pick in the 2007 draft. He hasn't panned out yet, but it's difficult to fault the selection too much. Despite some quality talent in the top 10 or so picks, not many players after the 14th pick have developed. Unfortunately, potentially the best player in that draft was selected right before the Reds picked, as the Braves snapped up hometown prospect Jason Heyward, leaving Devin Mesoraco for the Reds.

Despite the slow start to Mesoraco's professional career, his circumstances have always necessitated patience. Mesoraco was drafted out of Punxsotawney High School in Pennsylvania, which quite obviously is a cold weather state. Prospects are much more frequently and easily found in warm weather states, where the weather simply allows for longer baseball seasons and greater opportunities to hone baseball specific skills. In addition, Mesoraco injured his elbow and required Tommy John surgery, which cost him a year of development in high school. Finally, as a catcher, his development curve was already going to be longer than that of other position prospects, so the Reds will continue to need patience with Mesoraco's development. 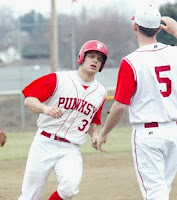 Mesoraco stands 6-1, but has added bad weight to his lower body (compare the high school photo with the Sarasota Reds photo). It happens with young catchers, due in large part to the physical demands of the position. Lower body strength can help reduce the stress on the knees, but also adds bulk to the lower half. Additional weight in the legs can rob a prospect of a bit of lateral quickness and agility, as the legs get thicker and slower. It's also something that can show up at the plate, as the changing body type can lead to changes in the swing. Ranger catcher Jarrod Saltalamacchia seems to be an example of this, as he has added weight to his legs and his swing no longer looks as fluid as it did with the Braves. Maybe it has more to do with Salty's shoulder injury, but even before that injury came to light his swing simply wasn't the same. Fortunately, Mesoraco has maintained a pretty solid swing. 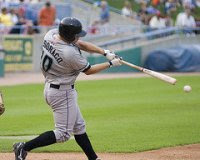 Obviously, his overall level of production wasn't inspiring, but his peripherals do give some reason for optimism. His walk rate was solid, he consistently hit line drives, and also flashed a bit of extra base power. Add in the fact that he finished up strong and will be in a home park that is more friendly for hitters in 2010 and the potential is there for a long awaited step forward.

As an amateur player, Mesoraco utilized very little stride in his swing, instead he used a rocking motion in his pre-pitch setup to load up for the swing. As the pitcher delivers the ball, he transferred his weight from back to front to meet the pitch. In utilizing this approach, he occasionally got out on the front foot to early, leaving him susceptible to good offspeed pitches.

In the professional ranks, Mesoraco made changes to the lower body action in his swing. Instead of the rocking motion to trigger his weight transfer, Mesoraco switched to a more traditional stride. The stride he uses is short and towards the plate, which closes up his stance a bit as the ball is delivered. His stance starts off square to the plate, but his stride closes him off a bit. Despite the change, he still doesn't incorporate the lower body into the swing all that effectively, relying more on his upper body and arms. His limited lower body action reduces his load and the torque generated by the rotation of the hips, which makes it difficult to envision him ever hitting for significant power.


Mesoraco utilizes a fairly upright and slightly wider than shoulder width stance. He uses a high pre-pitch hand position, as he holds his hands up at or even above ear level. In addition, he also uses a very high back elbow, which is at or above the level of his shoulders. At times, a high back elbow can make it more difficult to be quick to the ball, as the back elbow must drop before the swing can fire. Once the swing gets underway, he gets good extension out to and through the ball and finishes with one hand on the bat. His swing can get a bit long at times, which when coupled with a slightly closed off hitting position could leave him susceptible to good fastballs in on the hands, but generally speaking he does a nice job of centering the ball on the bat.

As each year passes, it's gets more difficult to be optimistic regarding Mesoraco. Even so, the circumstances surrounding his development warrant an additional year of patience. He was always the type of prospect that would have to travel a longer development curve, because of the additional layer of unpredictability inherent in catcher development. And, he did show signs of improvement in 2009, so he may be starting to figure it out. Fortunately, as a catcher, his bat doesn't need to improve too much for him to carve out an MLB career, but he does need to show something more in 2010. If he doesn't take a step forward next year, then he'll slide off this list completely.

Patience has been warranted, but now is the time for Mesoraco to make good on his ability. If not now, then it becomes increasingly unlikely that he'll ever take the necessary steps forward. For me, the statute of limitations on this particular opinion is one more year, but for now Mesoraco checks in at #16 on the list.
Posted by Lark11 at 8:42 PM