Of all the prospect reports I'll write, this one is the most depressing.

Josh Ravin has been my favorite pitching prospect since he first set foot in the Reds organization. He has a great combination of raw stuff and rock solid mechanics. Unfortunately, he also lacks an important skill for any pitching prospect: control. A mid-to-upper 90s fastball just isn't worth much if you can't control where it's going. 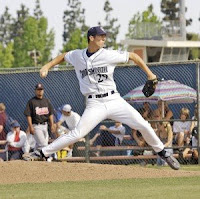 I was expecting Ravin to take a step forward in 2008 after a rough 2007 season. Unfortunately, he didn't show any improvement at all with his control, racking up strikeouts and walks in equal measure (literally).

Ravin still has top of the rotation stuff, a body type that scouts can dream on, and pitching mechanics that any coach would love. Unfortunately, all that adds up to very little these days, because he can't consistently get the ball over the plate, much less hit his spots inside the strikezone. Until he can do that, all of his other impressive attributes will be for not.

Unfortunately, Ravin was once again plagued by control problems. On the season, he pitched 56.1 innings for the Dayton Dragons and struck out an impressive 47 hitters. However, he also managed to walk 50 hitters. And, not surprisingly, when you walk 8.0 hitters per nine innings, both your ERA (7.19) and WHIP (1.86) will be atrocious.

You hear a lot about the hitters who are the "three true outcome hitters," (see: Cust, Jack) meaning that their plate appearances typical result in one of three outcomes (walk, strikeout, homerun) that are solely dependent on the hitter and free from interference of the other players on the field. At the rate he's going, Ravin may become the first "true outcome pitcher."

When I look at Ravin's stats, two thoughts cross my mind: 1) just how damn good could this guy be with improved command and control? And, 2) just how many damn pitches does he have to throw to get through a single inning? I love late count hitters, but I don't want to see that attribute in my pitchers all that often. Even so, given just how many walks and whiffs he tallies, Ravin obviously has to work very hard in every inning he throws. That constant state of stress on the arm is cause for concern, as he rarely gets to cruise through an inning without throwing high stress pitches. Even so, his mechanics should go a long way towards reducing his injury risk.

In 2008, Ravin struggled so mightily with the Dayton Dragons that he suffered the rare indignity of being demoted to the rookie Pioneer League. By that time, however, it was too late to salvage the season and he posted a 12/9 K/BB ratio in 12 innings with a 10.50 ERA and 1.83 WHIP for the Billings Mustangs. By any measure, it was clearly a lost season for Ravin. Whether it was a loss of confidence or a breakdown in mechanics, Ravin just never got on track in 2008.

I waxed poetically (or, at least as poetically as I can) about Ravin's mechanics in last year's scouting report. So, I'll keep that to a minimum here, though I still think he has about the best mechanics in the system.

Below are a few photos from Emily Smith that show Ravin's mechanics. Once again, they appear very clean.


In the first photo, he has a good high leg kick and coil to store up energy. His body is well balanced over his plant leg and beginning to drive forward with his hips moving sideways towards the target. In the second photo, he has broken his hands and has begun to drive forward with his lower body. His hips and shoulders are both still pointed towards homeplate. His glove-side foot is closed until just before landing, which helps keeps the hips closed as long as possible.

In the third photo, he has driven off the rubber and has taken a nice long stride. His arm is on track to be in the vertical position when his glove-side foot plants, which is an indicator of good timing in the delivery. His glove-side foot is on the verge of being planted pointing directly towards homeplate. Overall, Ravin has good tempo and body control, which gives him a fluid, under control delivery that generates substantial velocity.

As of now, I continue to have a lot of faith in Ravin. Maybe it's just a stubborn streak in me, but I'm just not ready to give up on someone with his combination of pure stuff and top notch mechanics. Someone with those positives should be able to find a measure of control. The baseball world will just make a little less sense if he fails to find the consistent arm slot and release point needed to enable him to be an effective professional pitcher. Fortunately, time is still on his side, as he will only be 21 years old in 2009. He still has time to right his career. Also working in his favor is the fact that pitching prospects don't always develop in a linear manner like position prospects. If a position player isn't at a certain level of performance on the development time-line, then there is cause for concern. However, it's different for some pitchers, as it just takes some longer to figure it all out, but one day it all clicks into place and they flip the switch to become quality pitchers.

Perhaps the best current example is Jeremy Guthrie of the Orioles, who didn't become an effective big league pitcher until the age of 28. Randy Johnson also struggled with his control, but eventually got it all figured out. Due to his height, Johnson struggled in the minors keeping his body in sync throughout his delivery, so maybe the 6-4 Ravin is having similar difficulties with his release point. So, there is reason to not write him off just yet. Even so, I'd be remiss if I didn't point out that guys like Randy Johnson and Jeremy Guthrie are the exception, rather than the rule.

At this point, I'm not sure where Ravin will start the 2009 season. I would imagine the Reds will send him back to Dayton, as it's difficult to imagine them keeping him in extended spring training until the Pioneer League opens up. Still, his struggles at Dayton last year may force the Reds to keep him in extended spring training for a while to work on his mechanics.

While I have yet to give up on Josh Ravin, it's clear that he needs to show some improvement with his control in 2009. He doesn't need to develop Maddux-esq command overnight, but he does need to cut down significantly on his walks and soon. Just cutting his BB/9 rate from 8.0 to 5.0 would be significant progress. A step forward is definitely needed, as while pitchers may not always develop in a linear line, they still actually need to develop. Unfortunately, Ravin has gone backwards since his 2006 debut and I expect most have just about written him off completely.

For now, Ravin lands at #24 on the list due to his stuff, mechanics, and more than anything my faith in him. I know this ranking will again put me at odds with every other baseball prospect list, but evidently I'm from the Kid Gleason school of thought wherein "you have faith in your fellas and they'll come through for ya." Even so, if Ravin continues performing at his current level, his stats will soon outweigh his tools and he'll slide all the way off the list. For now, his upside is what keeps him on the list over more polished, lower ceiling prospects. Still, a failure to take a step forward in 2009 will make it difficult to view him as even being a legitimate prospect. Here's hoping that Ravin can develop a measure of control and begin to ascend up the rankings and towards his considerable ceiling.
Posted by Lark11 at 8:23 PM