The latest news radiating off the hot stove:

Tim Brown of Yahoo! Sports reports that free agent infielder Orlando Cabrera is "choosing between offers" from the Rockies and Reds.
The Reds can offer much more playing time, but the 35-year-old Cabrera may prefer to play for a potential contender like the Rockies. He batted .284/.316/.705 last season with nine home runs and 77 RBI in 708 plate appearances between the Athletics and Twins and earned $4 million. Jan. 28 - 8:13 pm et

For the Reds sake, let's hope that he chooses the Rockies and the Reds are "forced" to use Paul Janish. Cabrera is on the wrong side of 30 and is coming off a poor 2009 season. Here is how he performed last year: 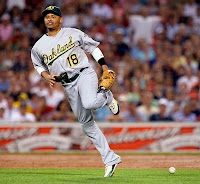 To break it down even further, here is how he handled plays in different situations:
To his right: -26
Straight on: -4
To his left: -11

Here is another nugget to be considered, Total Runs.

"Originally published in The Fielding Bible Volume II, Total Runs calculates a total value for each player based on his contributions on offense and on defense. There are four elements to Total Runs: runs created, runs saved, baserunning runs, and a positional adjustment that enables a comparison of players across positions."

So, in 2009, Orlando Cabrera had a total value of 80 runs to his teams, while Paul Janish had a total value of only 47 to the Reds. So, O-Cab was roughly 41.3% more valuable to his team than Janish. Impressive, no? Well, given that O-Cab had a significant playing time advantage over Janish, I'd say that no, it isn't impressive at all. Total Runs is not a rate stat, so it is dependent on playing time. The more you play, the more opportunities you have to be of value to your team. So, you have to take into account the amount of time a player is on the field.

So, O-Cab got 58.8% more plate appearances and 57.3% more defensive innings than Janish.

So, in sum, in order for O-Cab to be 41% more valuable to his team than Janish, he had to receive 59% more plate appearances and 57% more defensive innings. VERY IMPRESSIVE!!!

That's not even taking into account their respective salaries in 2009 and their likely salaries in 2010. Or, the fact that Janish was a rookie who hasn't reached his "peak" seasons yet and O-Cab is going to be 35-years old in 2010 and is clearly on a steep down slope.

By just about any measure, Paul Janish was BETTER than Orlando Cabrera in 2009 and given that Janish should be trending up and O-Cab should be winding down, I fail to see how that's going to change in 2010. The only way O-Cab would be an improvement for us is if he wasn't as bad defensively as he showed in 2009 and Janish wasn't as good. Anyone want to bet on the 35 year old over the rookie in a "regression to the mean" wager????

Obviously, there is still a bit of fog in defensive metrics, but I think they are at least in the right ballpark. This is the type of analysis that the Reds should be using. Taking into consideration the entire player to properly value what they bring to the table.

In summary, it's difficult to "improve" by adding more expensive, less productive players. Why pay more for name recognition when Paul Janish would bring at least as much production at a lower cost? Fact remains, Aroldis Chapman is the way we should be spending our money. Ramon Hernandez, Willy Taveras, and Orlando Cabrera are a complete waste of resources. Put the resources into players who *could* be significantly above league average, not into guys who are, at best, only marginally better than league average or even replacement level.
Posted by Lark11 at 9:06 PM