Zach Cozart is a prime example of the Reds new draft philosophy. Under Chris Buckley, they have focused more of their efforts on the premier defensive positions. Over the past few drafts, the Reds have targeted players who play in the center of the diamond and possess high baseball IQs. Instead of players with unrefined, raw skills, the Reds have drafted baseball rats. Guys who eat, drink, and sleep baseball.

Todd Frazier, Devin Mesoraco, Drew Stubbs, and Zach Cozart all fall under this category. While Cozart admittedly has the lowest upside of the four, he's also not without intrigue.

Zach Cozart attended the University of Mississippi and was selected by the Reds in the 2nd round of the 2007 draft with the 79th overall pick. During his time at Ole Miss, he earned the reputation as the best college defensive shortstop in the nation. Unfortunately, his bat lags well behind his glove. At the very least, though, he was competent at the plate in college, posting the following slash lines, HRs, and K/BB ratios:

Obviously, the Reds drafted him for his glove work, but he doesn't seem completely inept at the plate. In fact, he had more walks than whiffs in 2007, which is always a good sign.

In addition to his work at Ole Miss, Cozart has also spent time playing for the U.S. National team, which should provide him invaluable experience against international level of competition.

After he was drafted in 2007, the Reds sent Cozart to low-A Dayton, where he posted a .239/.288/.332/.620 line in 53 games. He hit linedrives at a paltry 6% clip, while hitting the ball on the ground 52% of the time. He was clearly over-matched, which is disappointing given that Cozart was drafted out of college. Some believe that top college competition is equivalent to double-A competition level. So, to see Cozart be completely over-matched by low-A pitching is disconcerting, though not really unexpected given his reputation. He also wasn't great with the leather, making 9 errors and posting a .956 fielding percentage in 46 games at shortstop. In light of his 2007 struggles, the Reds had no choice but to return Cozart to low-A Dayton in 2008, where Cozart displayed increased competence at the plate. 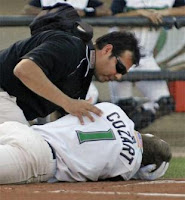 Cozart took a significant step forward on offense during the 2008 season. The Reds decided to send Cozart back to low-A Dayton, where he posted a respectable line of .280/.330/.457/.787 with 14 homeruns and a 77/24 K/BB ratio. He drove the ball with more authority, as evidenced by his improved homerun rate and his much improved 16% line drive rate. He also improved defensively, committing 10 errors and posting a .978 fielding percentage in 102 games.

It's difficult to measure minor league defense with statistics, as the best defensive metrics just aren't available, but at the very least Cozart made errors at a much lower clip in 2008. Another sign that he may have just been jittery and nervous during his first professional experience. In 2008, he obviously had a greater understanding of what it takes to be successful at the professional level and he was better across the board. Of course, repeating the level and facing low-A competition didn't hurt either.

I must admit, the more I see of Cozart, the more I like him. He doesn't have eye-popping tools, by any measure, but he may have just enough when coupled with his baseball IQ to be an effective MLB player.

At the plate, he has a simple, solid set-up. He stands very upright at the plate and uses a wide stance. However, he hits off his front foot and uses very little lower body in his swing. It's mostly an arm-swing, which may help explain his lack of power. Even though it's just an arm-swing, it's short and compact.

Cozart is a bit pull happy at the plate, which helps him hit more homers, but may harm his overall production. He'd likely be a more complete, well-rounded hitter if he used the whole field. He doesn't have the tools at the plate to try to pull everything, rather he'd be better off taking what the pitcher gave him and hitting the ball to the opposite field. In addition, Cozart has decent bat speed, so it's not like he goes into battle with the pitcher unarmed.

Anyway, here are a couple of clips of Cozart at the plate, one with the Dayton Dragons and one with Ole' Miss.

On defense, he has good, soft hands and a strong, accurate arm. However, he throws from a lower arm slot than is typical for a shortstop, but so far it works just fine for him. Still, as good as his hands and arm may be, I still question whether the range is there for him to be a top tier MLB shortstop. And, in the final analysis, range is the most important component of defensive performance, as it doesn't matter if you convert every ball you get your hands into an out if you are getting to signficantly fewer balls than other shortstops. He has good baseball instincts, which should help with both his defensive positioning and reading the ball off the bat. His instincts should help his defensive tools play up a tick. That said, his speed is below average and may only get worse as he advances up the ladder and continues to fill out. And, of course, Cozart is the type of player who will only go as far as his glove will take him.

Overall, it's still too early to draw conclusions about Cozart. He's the type of player that I typically like, as he's good defensively, possesses an understanding of how the game is played, and his total game is greater than the sum of its individual parts. His baseball IQ helps his somewhat limited tools play up a tick and he understands the nuances of the game. That said, his offensive performance is of concern. His 2007 debut was terrible and while his 2008 performance was better, it must be pointed out that he was a college player repeating low-A ball.

Even so, 2007 could have been caused by nerves or fatigue from playing more games than he ever had in the past. Or, it could simply have been that he was overmatched at low-A. The 2009 season will give us another data point for his career trajectory. The Reds will likely send him to high-A Sarasota for the full season (it seems doubtful that the Reds will push him to double-A in 2009) and his performance will reveal a great deal. If he can hold his own at high-A and put up a similar level of production to his 2008 level, then he may establish himself as a prospect of note.

I suppose the real question is about Cozart's defense. Just how good IS he? That's the question that determines just how good his bat has to be to make him a legitimate prospect. I have heard Cozart compared to Adam Everett defensively, but I'm not ready to buy into that as Everett is almost a once in a generation type player with the glove. Even so, if he is THAT good, then his glove will carry his bat, regardless of how poorly he uses it.

At this point, Cozart's career trajectory is still up in the air. Another season will go a long way towards establishing his performance level both on offense and defense. His ceiling seems to be that of an above defensive shortstop with #2 hole hitting skills. Or, he could flame out as a career minor leaguer who doesn't have the glove to carry his weak bat. Time will tell.