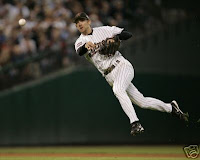 It may seem odd to have one of the least productive offensive players on a list of undervalued players, but that's a testament to just how good Adam Everett has been with the leather. Unfortunately, Everett's defense is still tremendously underrated, perhaps because he doesn't do back flips while running onto the field or needlessly field choppers with his bare hand. That said, self-promotion is the only thing keeping Everett from his rightful place among the pantheon of the greatest defensive shortstops in history.

Everett was originally drafted by the Boston Red Sox with the 12th overall pick in the 1998 draft. Everett was drafted out of the University of South Carolina, where he excelled at the shortstop position. Everett spent two years in the Red Sox organization, where his impressive defensive abilities were constantly on display, but concerns about his bat led the Red Sox to trade him to the Houston Astros along with Greg Miller for Carl Everett.

Everett spent several years in the Houston minor league system, where the Astros attempted to improve his offense to the point where he would be a viable, everyday shortstop at the MLB level. Taking a break from minor league baseball, Adam also joined the United States Olympic team at the 2000 Olympics in Sydney. That team, which included Ben Sheets, teammate Roy Oswalt, and Doug Mientkiewicz pulled off an upset of the high powered Cuban team to win the Gold Medal.

In 2002, at the age of 25, Everett laid claim to the Astro shortstop job and hasn't relinquished it since.

Adam Everett is the rare player that looks as good on defense in traditional scouting as he does in statistical analysis. All it takes to see why Everett is such a top flight defensive player is to see the way he carries himself at short.

Everett has a strong arm and good agility. His footwork at shortstop is impeccable, as he sets his feet very quickly, which consistently puts him in a good position to throw.

Everett's range and skills are so good that he makes the difficult plays seem routine, which may actually hurt him in the reputation department, as people may not appreciate how good he actually he is. 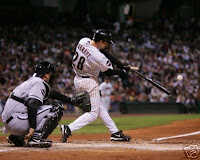 Admittedly, Adam Everett is a poor offensive player, there just isn't a polite way to put it. His career line of .247/.299/.357/.656 makes him one of the worst offensive regulars in baseball, so there just isn't much point in dwelling on it. However, the fact that a team carries a player with that level of offensive production is a testament to his defense.

The only positives that Everett brings to the table on offense are his bunting ability and his baserunning. Everett is one of the better bunters in baseball and is very effective at advancing runners. Also, Everett is capable on the basepaths, as evidenced by his 77% stolen base success rate. Unfortunately, when it comes to actually hitting the ball, Everett doesn't excel.

Defensive statistics are not perfect. Each one has a flaw or two that prevents you from getting directly to a quantifiable value for a player's defensive value. That said, if you take all the defensive statistics together and they all point to roughly the same conclusion, then it's a good bet that it's true.

If you look at his statistics from 2006, almost across the board Everett is the top player in each category. He has fantastic range, as evidenced by his Zone Rating, Revised Zone Rating, +/- performance, and the balls he has fielded that are out of his zone. In addition, his fielding percentage is fantastic, so not only does he get to more balls than all other shortstops, but he makes fewer errors on those balls.

To top it all off, you have his performance on turning double plays, where he turned the most double plays among shortstops in 2006. He didn't fare as well on starting double plays, but that speaks more to the ability of Craig Biggio to turn the double play than it does to Everett's ability to start it.


THE IMPACT OF ADAM EVERETT'S DEFENSE

The more difficult question is just how much is Everett's defense worth to his team. In John Dewan's Fielding Bible, they discuss how to use the +/- rating to roughly determine the impact the player's defense has on the team.

The book states that a "little less than half" of a player's plus/minus rating is a good estimate of the number of runs prevented. So, in 2006, Everett's +43 rating prevented about 20 runs. Another rule of thumb is that a good estimate of the value of a win at 10 runs. So, in 2006, Everett's defense prevented about 20 runs, which generated an extra 2 wins for the Astros.

One player accounting for ~2 wins with his defense alone is remarkable and unparalleled in the game today. That's the kind of impact that Everett can have on a team and that's the reason he is still undervalued. You won't find a player in the game who has more impact on a team's performance with his defense.
Posted by Lark11 at 9:46 PM