**Norris Hopper dropped down a bunt on the first pitch of the game and beat it out for a single. By the time he got back to first base, home plate umpire Bob Davidson had called him out for being out of the batters box when contact was made. Replays clearly show that Hopper was inside the box and Davidson blew the call. To top it all off, Davidson then proceeded to eject Hopper, who was riding Davidson from the dugout. Davidson, who is deridingly known as Balkin' Bob for his overzealous balk calls, clearly compounded the problem by throwing Hopper out of the game. MLB umpires are the best in all the major sports, but Davidson's performance tonight was an embarrassment.

**Mackanin really handled the Hopper situation poorly, as he should have been out of the dugout arguing the call. If he had gone out to argue the call, then Hopper likely wouldn't have been thrown out of the game. Poorly handled by both Balkin' Bob and Mackanin.

**The Reds first three hitters of the game put the first pitch they saw into play. Hopper should have been safe at first on the bunt and Keppinger and Phillips both hit the ball hard, but I'd like to see a bit more patience at the plate. There's really no reason why Hopper had to drop the bunt down on the first pitch. One of the jobs of the leadoff hitter is to take pitches to let the players behind you see what the pitcher is throwing. Hopper needs to demonstrate a greater understanding of what it takes to be an effective leadoff man before he can lay claim to a larger role for the Reds. Hopper needs to realize that singles hitters who can't set the table are not worthy of substantive roles at the MLB level.

**Jeff Keppinger made a real nice play at shortstop on a slow roller by Bengie Molina. Obviously, Kepp had a lot of time given the glacial pace at which Molina moves down the line, but Kepp charged hard, had good footwork, made a smooth transition with the ball from glove to hand, and made a strong throw on the run. Those are the kind of plays that give you confidence that maybe Keppinger can handle short over the long haul.

**Jorge Cantu put a few nice swings on the ball and racked up three doubles. As of right now, he looks like another steal for GM Wayne Krivsky. Cantu isn't likely to be a starter, but he gives the Reds a nice bat off the bench and greater flexibility on defense. Given that the Reds gave up almost nothing to get him (Cantu, Shaun Cumberland, and cash for Brian Shackelford, Calvin Medlock, and future considerations) he's another good risk/reward move by Krivsky. 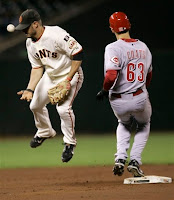 **Buck Coats is intriguing. He may not be a starter, but he looks like he could be a solid 4th or 5th outfielder. He plays good defense, has good speed, and seems to hit a little bit. Could be a nice depth acquisition by Krivsky.

**Kevin Frandsen is really hitting the ball well as of late. He's locked in and hitting line drives from gap to gap. He's got good pitch recognition and tremendous bat control. He's going to be a pretty good player. The Giants think he's another Robby Thompson with more offensive upside, which isn't half bad.

**It's hard to believe how much good young pitching the Giants have acquired. Tim Lincecum, Matt Cain, Jonathan Sanchez, Kevin Correia, Noah Lowry, and even Pat Misch look like potential impact starting pitchers at the MLB level. It's really an embarrassment of riches.

**It'll be very interesting to see how the Reds handle Norris Hopper and Jeff Keppinger. For the past few years, critics have been saying that the Reds rely too heavily on the long ball and need a more diversified offense. Critics point to the strikeout totals of the team as being a big problem. While I don't necessarily agree, as I think the detrimental impact of strikeouts is overrated, it's clear that Keppinger and Hopper are the type of contact hitters for whom the public has been clamoring.

For his career, Jeff Keppinger has made contact on 94% of his swings, while Hopper is at 88% for his career. Just for comparison sake, Ichiro is at 89% for his career. Keppinger and Hopper rarely swing and miss, but also don't walk or tally many extra base hits. So, would they help diversify the offense or act as a drag on the team's production?

**Poor job by Jason Ellison on the ball hit by Omar Vizquel in the 6th inning. Coats made a sliding effort, but Ellison wasn't in position to back him up. Obviously neither Coats or Ellison is a starter in 2008, but that play is just emblematic of the Reds need to improve the defense for 2008. They won't improve until the team defense is better.

In 2006, the Reds DER was .684. In 2007, the team DER has actually fallen to .680. So, despite moving Griffey out of center and bringing in Alex Gonzalez, the Reds are turning "balls in play" into outs at a lower clip. The Reds MUST improve the defense or they will NEVER become a 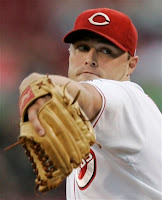 **It's time to close the book on Matt Belisle. He's just not an effective starting pitcher.

**Phillips seems to be pressing to get his 30th homer. If he does get one more homer, then he'll join Barry Larkin, Alex Rodriguez, and Alfonso Soriano as the only middle infielders in MLB history to have 30 homers and 30 steals in a season.

**Mike Stanton may well be done. He gave up a three run homer to Omar Vizquel in Pac Bell Park. That's not easy to do. How hard is it? Prior to his homer off Stanton, Omar had 2 homers on the season and only 1 in Pac Bell Park and had not hit a righthanded homerun since June of 2005.
Posted by Lark11 at 8:45 PM