Well, our All Undervalued Team is coming together nicely, but it's time to identify our closer. The guy who can slam the door and ensure victory. There are a number of interesting candidates around the majors, including a couple (Bray and Burton) on the Reds, but Brian Wilson of the Giants gets the nod.

The Giants drafted Wilson in the 24th round in 2003 out of Louisiana State University. Wilson was primarily a starter at LSU, but has worked almost exclusively as a reliever in his professional career. Wilson had his development hampered by an elbow injury, which required Tommy John surgery, but has begun to emerge as a potential dominant closer.

Wilson has three factors weighing heavily in his favor as a potential closer. Those three factors are: 1) He possesses tremendous stuff, 2) appears to have the appropriate mindset and mental toughness for success, and 3) the Giants WANT him to be the closer.

As to the first factor, Wilson throws a very heavy ball. He's got great velocity and a nasty slider, which undoubtedly has the Giants dreaming of another becoming the new Robb Nen. 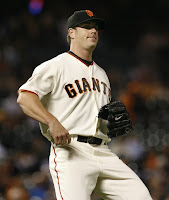 Wilson also has the desire to close. He wants to be the guy on the hill with the game on the line. A lot of young pitchers shy away from that kind of responsiblity, but Wilson doesn't appear to be one of them. Mental toughness is as important to consistent 9th inning success as is great stuff. Wilson appears to have both.

Finally, the Giants seem to want Wilson to claim the job. It is a lot easier to maintain an organization's faith in you, than it is to create that faith. Given the Giants desire to see Wilson succeed in the closer role, he'll have the opportunity to do so and the backing of the organization through any growing pains.

Like most pitchers, the three most important elements of a successful closer are limiting walks, racking up strikeouts, and getting groundballs. Wilson has done a nice job of getting groundballs and missing bats, but like most power pitchers has struggled at times with his control. As his control improves, his walk rate will decrease and his strikeout rate will increase.

If Wilson can consistently locate his fastball and control his wicked slider, then he'll be a very effective late inning reliever.

Here is the scouting report on Wilson from the 2007 Baseball America Handbook, where he was ranked the Giants 5th best prospect:

"The Giants drafted Wilson in the 24th round in 2003, knowing he wouldn't be able to pitch for a year because he had to recover from Tommy John surgery. Wilson's first pro season was a disaster, and he admitted he sometimes skated through his rehab work before rededicating himself and dominating the last two years. Wilson's biting 90-mph slider is the best in the system and is reminiscent of Robb Nen's signature pitch. He throws in the mid-to upper 90s with his fastball and hit 98 mph in the big leagues. Quietly intense and armed with a huge water serpent tattooed on his left arm, Wilson has the look of a closer. Fastball command was an issue for Wilson in San Francisco, and it maybe partially explained by an oblique strain that kept him from getting into a consistent rhythm. He feeds off adrenaline, which can work against him when he overthrows or tries for the strikeout. He hasn't learned to handle poor outings yet. The Giants prefer an established presence in the ninth inning, so Wilson may have to settle for a setup role this year. If he succeeds there, he could close for San Francisco in 2008."

The Giants have already given Brian Wilson several save chances in 2007 and he successful converted all three. In addition, he's been an effective setup man, as evidenced by his 8 holds. Given his pure stuff, his closer mentality, and groundball tendencies, I'd love to have Wilson in the Reds bullpen, which for a large part of the season seemed to lack mental toughness.

All in all, it appears that Wilson has all the makings of an effective closer and an organization with an interest in making it happen. In fact, it could happen as soon as 2008. He's certainly one to watch and he's unlikely to fly below the radar for long.
Posted by Lark11 at 10:39 PM