At this point, Keppinger is making a strong case to be the fulltime shortstop for the Reds next season. His offense has been robust and his defense surprisingly stellar.

The presence of Norris Hopper and Jeff Keppinger at the top of the lineup has created a different dynamic to the offense. Both are tremendous contact hitters and have such high batting averages that they seem to consistently be on base.

I previously discussed Hopper and came to the conclusion that he was better suited for a backup role in 2008. However, in looking at Keppinger, I come up with the opposite result. He seems to be the best option to be the starting shortstop in 2008.

One of the more interesting aspects of Keppinger season is that he has primarily done his damage on the road. His home numbers are solid, but he really shines on the road, which is counterintuitive when you consider the park effects of Great American Ballpark.

One redflag is that Keppinger has an abnormally high Batting Average on Balls in Play (BABIP), so he has received more than his fair share of "hit luck." He should see some regression to the mean in 2008, but he could still be a solid .300 hitter who rarely strikes out, as evidenced by his career contact rate of 92%.

As for defense, Jeff Keppinger has been surprisingly effective. Personally, as a general rule, I don't believe in moving players from less challenging defensive positions to more difficult ones. That is generally an unwise move, but in this case it may be working out just fine. 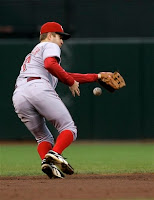 Defensive metrics are typically flawed in some way. However, if all the metrics point to the same end result, then there is likely something to it. If you compare what Keppinger has done at shortstop to Alex Gonzalez's performance, Keppinger has been better across the board. He has gotten to more balls and made fewer errors when he gets to them.

There is a question of sample size, but so far Keppinger appears to at least be Alex Gonzalez's equal with the leather, if not his superior.

It appears that the Reds could save money, establish a more well diversified offense, and possibly improve the defense by trading Alex Gonzalez away and installing Jeff Keppinger at shortstop full time in 2008. Keppinger would certainly be an effective #2 hitter in the order and could be the table setter the Reds have lacked in recent years.
Posted by Lark11 at 1:59 PM