Norris Hopper has been one of the hottest hitters in baseball in the second half. In fact, since the All-Star break, Hopper is hitting .387, which is tops in the NL. That kind of hot streak has led to a lot of speculation about Hopper hitting leadoff for the Reds in 2008. Unfortunately, I think that would be more than a little unwise.

Hopper is not a disciplined hitter, which is typically what you want to see out of your leadoff hitter. An ideal leadoff hitter should get on base at a good clip, see a lot of pitches, and grind out every at bat in an attempt to get on base any way possible.

Hopper is an aggressive hitter who consistently forces an early conclusion to an At Bat. That kind of approach really limits the number of pitches you see and walks you get. That kind of approach results in an On Base Percentage that is made up largely of Batting Average. It is difficult to be an effective leadoff hitter if that is the approach you employ. It can be done, but the best leadoff hitters reach base in other ways besides a hit.

If you compare Hopper to four of the best leadoff hitters throughout history, then you'll see a vastly different approach utilized by Hopper than the others. 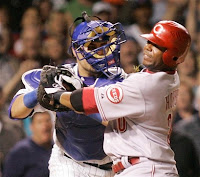 Those four are some of the best leadoff hitters in baseball history, though they utilize different approaches. Here's a bit about the similarities and differences in style.

It's hard to argue against Rickey Henderson being the best leadoff hitter in baseball history. His walk rate is very high (16.4%), sees a ton of pitches (4.34), rarely swings at the first pitch (13%), and makes contact with great frequency (88%). Henderson is the archetypal leadoff hitter.

Tim Raines was a similar leadoff hitter to Henderson, but a bit more aggressive. Rock Raines saw fewer pitches (3.76), walked at lower clip (12.8%), swung at the first pitch with greater frequency (25%), and made contact slightly more often (89%). Still, Rock and Rickey were too patient leadoff hitters who were massively successful.

Craig Biggio was a successful leadoff hitter, though he utilized a slightly different approach. Biggio had good speed and baserunning instincts, but had much more power than the usual leadoff hitter. In addition, Biggio had a lower walk rate (9.3%) than Rickey and Rock, but he made up for some of it by using the HBP as an offensive weapon. Over his career, 2.3% of Biggio's Plate Appearances ended in a hit by pitch. That's a much higher percentage than the others listed and helped increase Biggio's OBP.

At the other end of the spectrum is Ichiro, whose approach at the plate is mirrored by Norris Hopper. Ichiro has tremendous bat control and walks very infrequently (6.4%). He relies on hits, rather than walks and hit by pitches to get on base. Ichiro's OBP is only .046 higher than his batting average over his career. That said, he needs to hit around .315 to even have an OBP above .360. You don't want your leadoff hitter to have an OBP much lower than .360.

As for Norris Hopper, the first thing that jumps out at me is the percentage of pitches at which Norris swings (41%). It is almost to the point where Hopper swings at every other first pitch that he sees. It seems difficult to fathom that when this information gets around the league that Hopper will be able to maintain his level of production. If pitchers see that you'll offer at the first pitch so often, then they will refuse to give you a 1st pitch to hit in an At Bat.

Once word gets around the league on Norris Hopper, he'll need to make serious adjustments in order to maintain his success. Similar to Ichiro, Hopper would need to hit for a very high batting average in order to have an OBP high enough to justify batting leadoff. Hopper's IsoOBP is even lower than Ichiro's at .040, so he'd have to hit .320 in order to even post a .360 OBP. As it stands now, even if Hopper hit .300, he would still fail to have an OBP high enough to be an effective leadoff hitter.

In addition, Hopper steals bases at a much lower clip than the others. Over his career, Hopper is only at a 65% success rate, which is poor for someone with his speed. In fact, from a statistical standpoint, a success rate of 65% actually does more harm than good to the offense. If you aren't any more successful than that, then you are better off not attempting to steal at all.

Personally, I don't think it is common for a hitter to adopt a substantially more disciplined approach at the plate. It happens from time to time, but that is more of the exception to the rule, then the rule itself. For the most part, a hitter is who he is at the plate.

So, it would be unwise to pencil Norris Hopper into the leadoff spot in 2008 with the expectation that he'll either hit .320 or suddenly increase his walk rate. Neither seems very likely, so the Reds would be wise to utilize Norris as a 4th outfielder.
Posted by Lark11 at 9:00 PM