Thompson came over to the Reds in the now infamous Trade with the Washington Nationals. Thompson came over with Billy Bray, Royce Clayton, Brendan Harris, and Gary Majewski for Felipe Lopez, Ryan Wagner, and Austin Kearns. While the Reds will always be losers in that deal, the possible emergence of Thompson could make it a much easier pill to swallow.

The Nationals (more specifically, the Expos) selected Thompson in the 8th round of the 2003 draft with the 237th overall pick. Thompson attended La Plata High School, where he went 5-1 with a 1.30 ERA, struck out 80, walked 15, and allowed only 23 hits in 46.0 innings. To top it off, he posted a solid .370 batting average, proving that he could handle the bat a little bit as well.

Thompson has a free and easy delivery, good athleticism, and a quick arm. His arm slot is between an overhand and 3/4 delivery, which gives his fastball good boring action. Even though he had a good feel for pitching and good stuff coming out of high school, his development with the Expos/Nationals was slowed by a shoulder injury. He was still rehabbing the injury when he was dealt to the Reds. 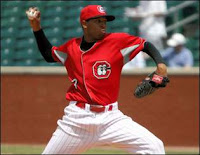 In 2007, Thompson actually had a solid season. At high-A ball Sarasota, Thompson posted a 3.77 ERA, 1.30 WHIP, and a 97/31 K/BB ratio in 105.0 innings. While those are fairly impressive numbers, Thompson failed to crack either Baseball America's Top 30 Prospects or my own top 25 Prospect List (he landed in my "Other Notables" section) because of concerns about his velocity.

In 2005, Thompson suffered a torn labrum and ended up missing a year and a half of development time. The success rate for surgeries to repair torn labrums is much lower than that of Tommy John surgeries. In addition, all reports on him from 2007 indicated that he had yet to regain his pre-injury stuff.

Prior to the injury, Thompson featured a 92-94 mph fastball, an average change-up, and an average curveball that had the potential to be a plus pitch. His curveball has tight rotation and a quick, downward break. In 2007, he struggled to match his former velocity, reaching only 92 at his peak and struggling to sustain his velocity into the later innings.

However, Thompson has exploded back onto the scene in 2008. He is now reaching 94 mph again and demonstrating good feel for his curveball. In addition, Mario Soto has once again worked his magic in imparting the secret to an effective change-up and this time Thompson was the beneficiary. Soto has been a tremendous asset to the player development department, as he has had very good success in teaching pitching prospects how to throw the change-up. Thanks in part to Soto, Thompson's change-up has become one of his most effective pitches. 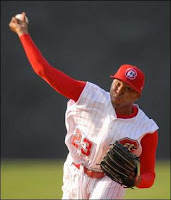 In 55.1 innings for double-A Chattanooga, Thompson has posted a 1.63 ERA, 0.96 WHIP, and a stellar 49/14 K/BB ratio. He has been very impressive and it's not luck. He has a .269 BABIP and a 2.45 FIP, so while he is likely to regress a bit from that lofty level of performance, his performance has been just about as good as the numbers indicate.

Another thing that helped Thompson's development was facing big leaguers in spring training. He pitched 2.1 innings in spring training and struck out 4 of the 7 hitters he faced, including Hideki Matsui. That experience has given Thompson renewed confidence in his ability to succeed. It's a confidence that he now brings out to the mound with him every time he works.

At this point, it'll be very interesting to see how Thompson progresses. He now seems fully recovered from injury and is pitching very, very well. The Reds minor league system has grown by leaps and bounds, but the knock on system has been that it is not very deep. Some scouts have expressed an opinion that there are some impact players like Bruce, Bailey, and Cueto, but not much depth behind the top tier. Some have expressed a belief that the system would fall off after that crop had graduated to the big leagues. However, players like Thompson are stepping up to fill the void and are poised to form the next wave of top prospects in the Cincinnati system.

At this point, the future is once again bright for Daryl Thompson, which is very good news for the Reds and fans of the team.
Posted by Lark11 at 6:27 PM