Things A Happening in Redsville

There have been quite a few things of note happening in Reds country of late.

** First and foremost, the arrival of Jay Bruce. What more is there to say. He has been acknowledged as the premier prospect in all of baseball and he wasted no time in announcing his presence at the MLB level.

It's hard to envision a better debut. Bruce went 3-3 against the Bucs with a double, two walks, and a stolen base. That's kind of debut you hope, but can't realistically expect.

Still, anyone who saw Bruce's laser shot triple off the right centerfield wall at Pac Bell Park in the futures game last year knows he's got serious talent. His bat speed is ridiculous and it should be fun watching Bruce dominate the competition for years to come.

** I hate to point this one out, but it does seem relevant. Former Red Josh Hamilton is having a dominant year in Texas and has joined Jay Bruce as the two best stories in all of baseball. Jay Bruce for his electric debut and Josh Hamilton for his amazing triumph over drug addiction. Hamilton currently leads the Triple Crown categories and his talent means that it's not a fluke. There may not be a more talented player in baseball, with the possible exception of that fellow named Alex Rodriguez.

As good as Edinson Volquez has been this year, it's hard to swallow

the fact that the Reds could have had an outfield of Bruce and Hamilton over the next decade. In all seriousness, there may not be two more talented players in the game today and they could've formed the foundation for the next eight to ten years. Almost regardless of which player the Reds chose to round out the outfield with Jay and Josh, that would've been an outfield of almost unparalleled skill.

For me, it's still hard to swallow the fact that we traded Hamilton away. I hated the trade then and I still really dislike it. Edinson has been great, but Bruce and Hamilton are a tandem that could really have taken us places.

** The Reds finally managed to separate the the inseparable. The Reds sent Corey Patterson to the minors, taking away one of Dusty Baker's favorite toys. Whether the Reds realized that Corey wasn't helping the team or just they felt the need to ensure that Dusty would give Jay Bruce the playing time he deserves is largely irrelevant, as the important thing is that the Reds made the right move to improve the team.

It's still hard to fathom that we are paying Corey Patterson $3M when no one else even wanted him. I guess the Reds found out the hard way why no one else wanted him.

** Devin Mesoraco has arrived. Given his poor debut in 2007 and his slow start in 2008, I was beginning to get concerned. That said, he has really turned it on for the Dayton Dragons. He is currently hitting .283/.348/.450/.798 and a robust .368 in his last 10 games. Mesoraco is beginning to show the skills that made him the Reds first round draft pick. It is still a long way to the majors, but Mesoraco has taken an important first step.

** The Reds designated Scott Hatteberg for assignment. Hatteberg is a "pro's pro" and a true 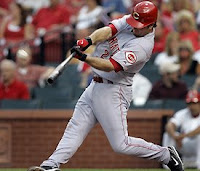 professional hitter. Unfortunately, as impressive as Scott's approach is at the plate, it can't fully offset his limited power. Accordingly, Scott's tenure with an organization lasts only as long as it takes for that team to find a first baseman with a better upside, then it's time to move on to a new team.

Scott deserves a chance to play for a good team, so hopefully the Reds will be able to accommodate him.

** For some odd reason, the Reds aren't giving Paul Janish a chance to play. It really is an odd decision, as this is likely the only chance the Reds will have to get an extended look at him against MLB competition. With Alex Gonzalez and Jeff Keppinger both nursing knee injuries, the Reds could be giving Janish the starts at shortstop to determine if he has a future at the MLB level. 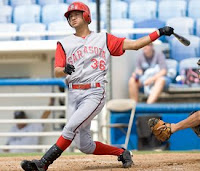 However, the Reds don't seem to be interested in finding out what Janish can do, as Dusty continues to trot out once of his personal favorites to play the position: non-shortstop Jerry Hairston Jr.

It seems like a missed opportunity in what is shaping up to be another lost season. 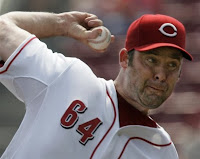 ** The Reds declined to meet the salary offered to Tom Shearn by the Korean League, so Shearn is now winging his way to Korea to play ball. Shearn really isn't an MLB pitcher, but it's great that he persevered long enough to get at least one summer in MLB. His hard work and never say die attitude earns him a spot in Major League Baseball history and a never-ending series of stories to tell his grandkids.

All the best to Tom in his far East excursion.

** Another lackluster performance got him sent down to the minors. At this

point, it's difficult to imagine him getting another shot with the Reds, but that's hardly unjustified. Belisle has gotten chance after chance, but never taken advantage of his opportunities.

Belisle always appears to be on the cusp of success and his peripherals are always solid, but like several other pitchers around the league his overall performance is worse than his peripherals. Given that, Belisle may actually be the perfect pitcher for the Reds, who annually find the whole of the team to be less than the sum of its individual parts.

Maybe Belisle just needs a change of scenery, but his time in Cincinnati should now be at an end.
Posted by Lark11 at 9:15 PM