Ravin at Dayton and Dorn at Chattanooga

Well, now is as good a time as any to check in on my two favorite Reds prospects, Josh Ravin and Danny Dorn. 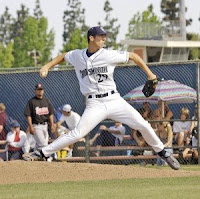 Josh Ravin was assigned to the low-A Dayton Dragons, where he has already made two starts. In his first start on May 17th, Ravin faced the Great Lakes Loons. He worked 4.2 innings, allowed 6 hits, 4 earned runs, and posted a 4/2 K/BB ratio. Not great, but not terrible. Ravin struggled mightily last year with his control, so the key indicator for him this year will be his walk rate.

Ravin made his second start today and he was pretty impressive. Facing off against West Michigan, Ravin worked 5.1 strong innings. He didn't give up a run, allowed only 3 hits, and posted a strong 4/1 K/BB ratio.

All in all, it's a pretty encouraging start. Ravin had serious control problems last year, which ultimately led to him sliding all the way off of Baseball America's Top 30 Prospects List. However, I still like him a lot and rated him at #14 on my prospect list this past offseason. I'm a big believer in the benefits of sabermetrics/statistical analysis in baseball, as it provides a good picture of what is going on. However, I don't think it quite provides the whole picture.

In Ravin's case, I think his mechanics are tremendous and when you pair that with his impressive stuff, then I think you have a real chance to develop a special starting pitcher. There is a long road between low-A and the majors, but I'm pretty encouraged by his first two starts at Dayton.

As with Josh Ravin, I see a bit more in Danny Dorn than the stats might indicate. Frankly, I think his swing is just about picture perfect. He's got great balance and tempo in his swing, which should translate into quality performance at every professional level.

Dorn started off 2008 rather slow, which was a bit disappointing considering how well he performed in 2007. In addition, Dorn struggled through injury and ended up missing a couple of weeks. However, Dorn is beginning to get in the grove for double-A Chattanooga. In his last 10 games, Dorn is hitting .345 with 4 extra base hits and 7 RBI. That streak brought his overall line up to .239/.357/.326/.683. While still not spectacular numbers, they are now heading in the right direction.

My impression of Dorn is that he is a pure hitter. While he lacks big power, his on base skills will likely be the determining factor in the type of career he has. I'd love to see him have a strong 2008 campaign and force his way into the Reds plans for 2009, after Dunn and Griffey potentially leave town.

Most scouts still project Dorn as a 4th outfielder, but I still think he's got a real chance to be something more than that. His sweet swing could make him a legitimate option in leftfield for the Reds.
Posted by Lark11 at 2:33 PM