Looking Back on the Reds GM Switch

Well, it's time to look back on the Reds latest headscratcher: Firing GM Wayne Krivsky and replacing him with Walt Jocketty. Unfortunately, this represented yet another change for an organization that has undergone far too much of it lately. More than anything, the Reds need stability. With this latest batch of hirings and firings, this organization has now had 4 different managers and 3 different GMs in the last 5 years. The best teams demonstrate tremendous stability in their front office and coaching staff. The Braves, Red Sox, and Twins are good examples.

Say what you will about Wayne Krivsky, but what did he do this year to deserve the ax? To me, this is a baffling move. Truly baffling. If you were going to make this move, why not make it over the offseason when Jocketty could have done something to reshape this team?

END OF THE KRIVSKY ERA

Krivsky certainly had his ups and downs, but taken in total he's performed well in his time in Cincy. However, it's clear that he made some missteps. "The Trade" was and will continue to be beyond terrible. I (still)don't like the Hamilton for Volquez trade and Krivsky had an alarming habit of giving out multiyear deals or just large deals to mediocre veterans (Stanton, Patterson, Castro).

Still, Krivsky was leaps and bounds better than O'Brien, who couldn't even pull the trigger to alleviate our 4 outfielder fiasco. Krivsky stole Hamilton and Phillips in very shrewd moves that demonstrated both strong player valuation skills and the willingness/confidence to roll the dice. He locked Harang into an extension and brought in the perpetually underrated Scott Hatteberg.

As for Jocketty, I'm not entirely sure what he has done in St.Louis that's so great. He seems to excel at acquiring expensive veteran talent (Rolen from the Phils, Edmonds from the Halos, McGwire from the A's, etc), which is the exact opposite direction from where we need to go. It's hard not to conclude that he got very lucky with Albert Pujols. Maybe he personally saw something in Albert, but if he really knew what he had, then he wouldn't have waited until round 13 to draft him. 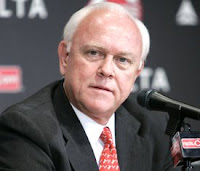 in St. Louis because he couldn't get along with Jeff Luhnow, Cardinal V.P. of scouting and player development, who is one of the new wave of baseball minds who embraces statistical analysis. The Cards showed Jocketty the door and brought in GM John Mozeliak, who embraced the new wave of baseball thought, while we decided to hire the old school guy. I'm not entirely sure we come out ahead in that deal.

It just seems like a move that smacks of desperation, when there is really no need to be desperate. Unlike firing a manager, firing a GM is unlikely to spur the team on to better performance. In the case of a change of manager, just the change itself can be enough to change the environment and performance (i.e. Pete MacKanin). For me, it seems like changing GMs at this point in the season would not only lack positive impact, but would in fact have a detrimental effect.

Changing an entire GM regime over will inevitably bring about a period of adjustment. People have to get used to a new dynamic and there will inevitably be a reshuffling of employees or at least employment responsibilities. Overall, this just seems like more instability for an organization that has suffered from far too much of it lately. In addition, it's difficult to see what Jocketty brings to the table that Krivsky lacked.

However, it did result in some revelations about Krivsky's final days. He's on record as saying that he was told to do what it takes to sign Corey Patterson, but he also stated that Dusty Baker was his choice. Still, it seems that at some point, Krivsky lost some of his independence and the total authority to act on behalf of the club.

Unfortunately, this seems like change for nothing more than change's sake. This organization is beyond past the point at which we need to commit to a plan and stick to it. This constant reshuffling of the deck does nothing to help this organization succeed. Consistency and continuity are what drives success. It reminds of the old saying: Do SOMETHING, even if it's wrong. Well, the Reds NEED to stick with a plan, even if it's wrong. By constantly changing course, we never even get to find out if we were on the right path before we conclude that we have taken a wrong turn.