"In the red and blue corner, we have the 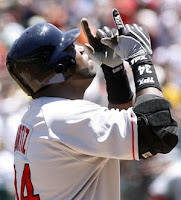 reigning heavyweight champion of the world, the pride of Santo Domingo, Dominican Republic, David "Big Papi" Ortiz, weighing in at a conservative 230 lbs."

"And, in the blue and white trunks, the challenger Evan "Don't Call me Eva" Longoria, the fighting pride of Downey, California and weighing in at a solid 210 lbs."

"It should be a great bout tonight!!"


The Red Sox need the heart and soul of their offense to come up big tonight. Earlier in this series, the Rays were able to keep the big man in check. However, he had a big homerun in game 5 and two hits in game 6. If the Rays are to stand a chance, then they'll need to continue to silencing Big Papi. The Red Sox just aren't the same on offense if Ortiz isn't firing on all cylinders.

As for the Rays, they really need to get B.J. Upton some help. Upton has been about the only player doing anything of note on offense, but he needs some help. Longoria is the likely player to provide some secondary offense, as Upton is unlikely to be able to beat the BoSox on his own. 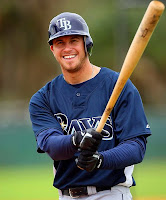 When Longoria was swinging well, the Rays were playing well.

Game 7 is about to get underway and I think these are the two key players in the game. Unless the wheels completely come off one of the starting pitchers, I think the outcome will be determined by the bats of Longoria and Ortiz.

But, of course, time reveals all. And, if the game isn't actually decided by Longoria and Ortiz, then forget I said anything. ;)

Email ThisBlogThis!Share to TwitterShare to FacebookShare to Pinterest
Labels: 2008, Baseball