Even with the new GM, Reds still don't quite get it... 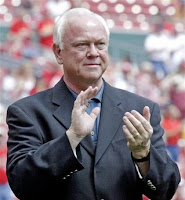 News out of Redsville today that GM Walt already has two offers out to keep two free agents with the club. Disappointingly, though not surprisingly, those two are Jerry Hairston Jr. and David Weathers.

General manager Walt Jocketty wouldn’t list all of the free agents on the current roster that the Reds are interested in bringing back.

But Jocketty did say the club has made proposals to reliever David Weathers and outfielder/infielder Jerry Hairston Jr.

“We’re waiting to hear back from their agents,” Jocketty said.

Weathers and Hairston had the best years of the free agents on the roster.

Starting with the obvious, Hairston is just the last in the long line of crusty veterans to experience a rebirth in the restorative fountain-of-youth waters of Great American Ballpark. However, the Reds would be wise not to invest heavily in Hairston and certainly not more than a one year contract. 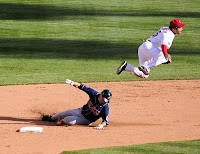 If the Reds can get JHJ signed to an inexpensive, 1-year contract then he might be a solid option off the bench. However, given the Reds track record I wouldn't be surprised to see an overpayment in terms of both money and years. If so, they'll be overvaluing a small sample size and overlooking the statistical inflation created by Great American Ballpark.

As for Weathers, re-signing him would involve a more subtle error in judgment, but one the Reds continually seem to make.

Weathers is 39 years old and by any measure his career is winding down. So, the Reds essentially have two options. They could maintain the status quo and resign Weathers to another contract. By doing so, they will lock in ~70 average innings worth of production from Weathers. However, he's likely to decline due to his age. So, the real issue on Weathers is this:

To me, it seems obvious. You cash in the value remaining in Weathers and plug it back in at the bottom levels of the organization. The Reds can't afford to ride their assets until there is zero value left. They have to buy into the Value Cycle and seriously commit to it. To do so, they have to develop talent and then be willing to cut ties with it while it still possesses some value. As of now, they have the first part down, but they haven't yet demonstrated a willingness to churn any of that talent.

What the Reds SHOULD do with Weathers is offer him arbitration and collect the compensatory pick(s). Last offseason, Weathers was the last Type A NL reliever, so at the very least he'll warrant Type B compensation this offseason. It might actually be better for the Reds if he were to be classified as a Type B free agent, as teams may not be willing to forfeit a draft pick to sign Weathers. Regardless, the Reds can likely let Weathers walk for a pick and then replace his production by signing a Type B free agent reliever without forfeiting a pick of their own. They would lose nothing in production or cost, but would net a compensatory pick they wouldn't otherwise have.

By churning talent, the Reds would bring additional talent into the organization to replenish the farm system without losing anything of value. To be successful in the majors, you have to buy into the Value Cycle and be absolutely ruthless in implementing it. You HAVE to churn players to maximize value, but sadly the Reds don't appear to be doing it with David Weathers.

If the Reds sign Weathers, then value will be leaving the organization.
Posted by Lark11 at 11:02 PM