It was a season of significant turnover in the Cincinnati outfield. The Dunn and Griffey era came to an unceremonious end when both were dealt away by Walt Jocketty. The Reds waited until Jr. hit his 600th homer, which is certainly a momentus achievement.

Thankfully, the Reds should be in good shape in 2009 with the emergence of uber-prospect Jay Bruce and the potential arrival of Chris Dickerson. In addition, solid prospect Drew Stubbs isn't far away.

However, the beginning of 2008 saw the old standby of Dunn and Griffey with an uhealthy dose of Corey Patterson added in for good measure. Things should be improved in 2009, but here is what the 2008 projection looked like. And, now here is the review with the benefit of hindsight. 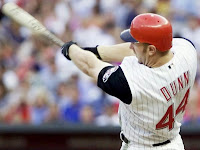 I still believe that your view of Dunn reveals something about your larger view of baseball, but he's no longer a "problem" for Reds fans. Walt Jocketty dealt him to the Diamondbacks for Micah Owings, Dallas Buck, and Wilkin Castillo.

During his time in Cincy and Arizona, Dunn continued to be Dunn. Whether you love him or hate him, he's one of the most reliable and consistent producers in baseball. You can debate the value of that production, but it's impossible to dispute the consistency.

Dunn should hit really hit third in the lineup. His blend of table setting and table clearing ability makes him a logical fit in the 3rd slot. However, the Reds hit him 5th or lower for the majority of the time. As a team, the Reds put up the following batting order spot production (omitting pitchers):

I guess it's not suprising that if you hit 5th, you aren't going to score as many runs. By and large, you'd be left to be driven in by the 7-9 spots in the batting order and their .709 OPS.

Another not too surprising observation, your offense is going to stink when your top two spots in the lineup crank out a .316 OBP. Seriously, a .316 OBP??? The 7-9 non-pitchers PAs created a higher OBP at .324. Maybe, just maybe, that's something that needs to be rectified for 2009. Still, how easy is it going to be to raise the team OBP when you cut ties with your two best OBP players (Hatteberg + Dunn)?

There just isn't much left to say about Patterson and frankly I'd rather turn the page and relegate Patterson to the depths of my memory. He played good defense, but was a HUGE detriment to the offense.

Griffey deserves better. It's difficult to see it any other way. He 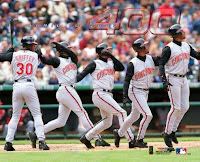 has always been a class act. He never took any short cuts and never succumbed to the IPED temptation. Unfortunately, his career is on the verge of ending with a whimper, instead of a bang.

It's difficult to see the greats of all-time fade away, but it's inevitable for just about all of them.

Unfortunately, during his early 30s when he still had the skills to be productive, he couldn't be healthy. In his late 30s, he finally stayed reasonably healthy, but his skills seemed to have eroded to the point that he no longer could be a productive player.

Maybe things would have been different if Griffey had been moved out of center sooner, but that's not the way it happened. At this point, Griffey is a huge liability on defense (-17 in only 763 in rightfield) and his offense no longer justifies his status as a starter. I'm hopeful that an offseason can rehabilitate his swing and he can finish up his career in style with an AL squad.

However, he seems to have lost the ability to drive the ball with authority and his batting average has fallen. Scouts have reported that his bat speed is down and that he can only succeed by guessing right on breaking balls.

Jocketty cut a deal with the White Sox bringing in Nick Masset and Danny Richar. Griffey struggled with the ChiSox, but interesting news came out this week. Griffey had his left knee scoped, as he played in pain all season and had his knee drained 3 times during the season.

So, maybe Griffey can get healthy this offseason and have a bit of a resurgence in 2009. A player of his status deserves a better fairwell than he is currently in line to receive.

Hopper's season was over almost before it began. He suffered a torn elbow ligament and underwent Tommy John surgery. Hopper is a great story and a fan favorite. I've been skeptical about him in the past because of his approach to the game, but he gets the absolute most out of his ability and it's impossible not to respect him that him.

I'd be intrigued about Hopper as a potential leadoff hitter, but his opportunity has probably passed in the Reds organization. It's difficult to fathom how much of a player's career can come down to timing and opportunity. I'm sure countless quality careers have been lost due to a lack of opportunity.

Hopefully, 2009 brings about renewed health and opportunity for Hopper.