The Ultimate "Addition by Subtraction"

It appears that Walt Jocketty isn't an idiot. That's about the only conclusion to be drawn from the decision to cut ties with Corey Patterson and Paul Bako.

Jocketty "admitted that Patterson had become a hot-button issue with the fans." That would be an understatement, to say the least. Patterson and Bako were two of Dusty Baker's handpicked choices this past off-season, citing the desire for more "options." Evidently, they didn't actually have to be good options.

Reality and hindsight can at times be a depressing combo, which 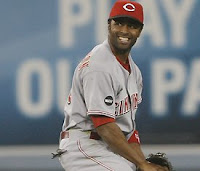 was never more true than when optimism swirled around the Reds when Dusty Baker mentioned that he was in contact with former players who were very eager to come play for him in Cincinnati. Mark Prior was one name mentioned, but even the oft-injured former ace was setting the sights far too high. In actuality, the players he was talking about were Corey Patterson and Paul Bako.

Cutting ties with Patterson and Bako will be the ultimate example of "addition by subtraction." It's difficult to fathom just how bad the Dismissal Duo actually were in 2008. Equally unfathomable is just how much playing time they received last year.

In 2008, Patterson and Bako combined to receive 730 plate appearances. That's the equivalent of a full-time starter's playing time and a handful more. In his career, the unbreakable Adam Dunn has never exceeded 683 plate appearances. So, the duo of Bako and Patterson received more playing time and had a greater opportunity to make an impact than a typical Adam Dunn season. Sadly, they fell just a wee bit short of "Dunn-ian" level production.

In 2008, they combined to hit a paltry .211/.266/.337/.603 with 16 homers, 50 walks, and 147 strikeouts. It's just not possible for a team to be successful while getting 730 Plate Appearances worth of .603 OPS. That combination of putrid production and massive playing time is almost a built in head-wind for the entire offense, so perhaps no move made this offseason will have the same impact as jettisoning the dead weight. 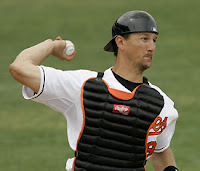 To be fair, I don't think Krivsky is an idiot either. However, it's clear that Jocketty was waiting in the wings and that Krivsky had somehow lost the faith of the new ownership group. So, he wasn't calling his own shots and had to placate the new manager and the new owner.

Thankfully, we can close the book on the lunacy of the 2008 season and look forward to a brighter 2009. I mean, it's not like we can't possibly throw away 730 plate appearances on a .603 OPS level of production.