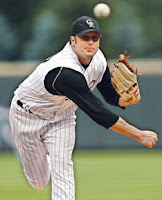 Today, the Reds signed Josh Fogg to a one year contract worth $1M and tossed him into the mix for a spot in the starting rotation. It's an odd move, as it doesn't improve the Reds in any way, shape, or form.

I'm a big believer in risk/reward acquisitions, but while Fogg at $1M certainly comes with low risk, he also has essentially zero upside. Fogg is as good as he going to get, which isn't good at all. All this move really accomplishes is to clog up the 25 man roster and delay the arrival of impact pitching prospects.

The acquisition of a veteran replacement level pitcher for the backend of the rotation only makes logical sense for three reasons:

1) The veteran lacks the upside of the prospect, but will provide better production in the short run.
2) The veteran will work more innings and deeper into games than the prospect.
3) The veteran serves as a stop gap to give the younger pitchers more time in the minors to develop.

To me, those seem like the only logical reasons to bring in a stop gap veteran pitcher like Fogg. However, in this case, none of those reasons seem to be applicable to the Reds. 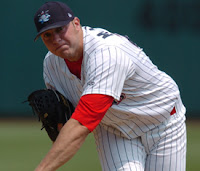 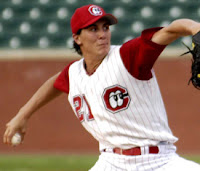 Unfortunately, Fogg not only lacks the upside of the Reds pitching prospects (Bailey, Cueto, Volquez, Maloney, etc), but his current baseline production isn't any better than what those prospects would provide in 2008. So, not only does Fogg lack the upside of the prospects, but he doesn't even provide better short run production. So, where's the benefit of bringing him in?

In 2007, Fogg pitched 165.2 innings, posting a 4.94 ERA and a 1.53 WHIP. On his career, he hasn't been much better, posting a 4.90 ERA and a 1.46 WHIP. In addition, Fogg has a career strikeout rate of 4.83 K/9, which is too low for him to be successful. In the modern era, it's difficult to find many pitchers who have maintained consistent success with a strikeout rate below 5.0 K/9. Fogg's low strikeout rate means that he allows a tremendous amount of contact, leaving him at the mercy of the Reds defense, which is never a good thing.

Fogg's career performance isn't a result of Coors Field or bad luck, rather he's earned every last ounce of his career stats. He's not a good pitcher and he's not a good option for the Reds.

2) Logging More Innings than the Prospect

Given the way the modern game treats its young pitchers, it's

sometimes advantageous to bring in a veteran pitcher who can handle a heavier workload. There is a school of thought that the risk of injury to young pitchers increases as they tire. As a pitcher tires, his mechanics can break down, which leads increases the susceptibility injury. Veteran pitchers can handle heavier workloads, which can take the strain off of a team's bullpen.

If you have a staff with a lot of young starting pitchers, then they likely won't work deep into the game very often, which leads to more appearances and innings pitched by the bullpen. So, there are times when it makes sense to add a stopgap veteran pitcher.

However, that really doesn't seem to be the case with Fogg. In 2007 for the Rockies, Fogg pitched 163.2 innings in 29 starts, which works out to only 5.2 innings per start. He went 7.0 or more innings only 7 times and his longest start of the year was 7.1 innings.

While a rookie pitcher will be limited by strict pitch counts, Josh Fogg rarely works any deeper in the game than they would, so the veteran benefit is negligible at best. 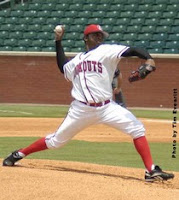 It also doesn't make sense that Fogg is in the mix in order to give the prospects more development time. Bailey doesn't have anything left to prove in the minors. Cueto dominated three levels of the minors in 2007. Volquez is 24 years old and has pitched part of three seasons in the majors, so he his development time is in the past and he isn't going to benefit from going back down on the farm. In addition, Matt Maloney is essentially ready for the majors. In essence, our four best pitching prospects are already major league ready, so Fogg is an unnecessary acquisition.

Overall, there is no logical reason for the Reds to have acquired Josh Fogg. He is a poor bet for the 2008 season and he would likely be outperformed by each of our top 4 pitching prospects. It has taken years for the Reds to develop homegrown pitching, but now is the time to embrace it. All offseason the Reds have been rumored to be acquiring a veteran starting pitcher, while seemingly having no confidence in their pitching prospects.

The future of the Reds will largely be determined by the young pitching prospects, but the Reds need to realize that the future starts now!
Posted by Lark11 at 4:10 PM