Daryl Thompson may well have had the best 2008 minor league season that no one heard about. I'm not sure why, but Thompson seemed to get very little publicity for his stellar performance. Regardless of the lack of ink, Thompson's performance certainly put him back on the Reds' radar.

Thompson spent time at four different minor league stops and got a cup of coffee in majors in 2008 and overall performed exceptionally well. Thompson tossed 4.0 uninspiring innings for the Gulf Coast League and 15.2 innings of disappointing baseball for high-A Sarasota before really taking off.

Thompson worked 61.1 dominant innings for double-A Chattanooga. He posted a 1.76 ERA, 0.95 WHIP, and a 56/14 K/BB ratio. And, he really was about that good, as evidenced by his component stats, 2.56 FIP and .271 BABIP. It really was a stellar performance and it earned him another promotion.

Overall, Thompson's 2008 season saw him post a 2.70 ERA, 1.07 WHIP, and a 99/30 K/BB ratio. His GB/FB ratio was only 1.01, so has only neutral tendencies. Even so, that level of performance makes him the front runner for minor league pitcher of the year in the Reds organization. Not surprisingly, Thompson did get in some time at the major league level.

Unfortunately, Thompson's MLB time did not go quite as smoothly. Thompson made three starts in late June and early July. His first start came against the Yankees at Yankee Stadium, which is a mighty tall order for a rookie. Even so, Thompson acquitted himself well, working 5.0 innings giving up 0 runs, 4 hits, 4 walks, and tallying 2 strikeouts. He also provided one of the more memorable moments in a lost season. In the 2nd inning, Thompson gave up a leadoff double to Alex Rodriguez. He followed up on that by giving up a single to Hideki Matsui, which advanced A-Rod to third. Thompson walked Jason Giambi to load up the bases with no outs.

Not an easy spot for a rookie making his MLB debut, but Thompson proved up to the challenge. He proceeded to strikeout Jorge Posada for the first out. He then got the ever-aggressive Robinson Cano to foul out on a popfly to Paul Bako for out number 2. Thompson then faced Melky Cabrera as the final obstacle to getting out of trouble. He blew an inside fastball by Melky for the strikeout to close out the inning. Thompson really rose to the occasion and demonstrated some true intestinal fortitude. When Thompson blew the final fastball past Melky Cabrera, Dusty Baker basically leapt off his seat in excitement. After working through the trouble, Thompson polished off a very strong MLB debut, throwing 96 pitches and giving up no runs to the Yankee juggernaught.

Anyone who has seen Daryl Thompson pitch knows that his mechanics almost defy description, but I'll give it a workman like effort.

One of the first things that jump out at me about Thompson is "the crouch." In the first photo, you can see that he bends at the waist when driving off the rubber, which is just the first of many unusual aspects of his mechanics. 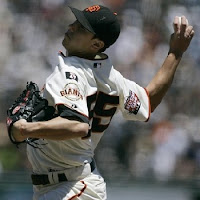 In these two photos, you can see Thompson on the left and Tim Lincecum on the right. Each is at a similar point in his delivery and the comparison I want to make is the position of the pitching hand. Thompson's hand is on top of the ball and he uses an unorthodox wrist cock, which is not the norm in pitching. On a positive note, during his time at the MLB level Thompson appeared to have reduced his wrist cock. As for Lincecum, his hand is on the side of the ball (but it almost appears to be under the ball) and he has no wrist cock. Lincecum's arm is basically a "L", while Thompson's arm looks like the Cincinnati Reds wishbone "C". On the plus side, you can see that both Lincecum and Thompson are keeping their elbows below shoulder level. 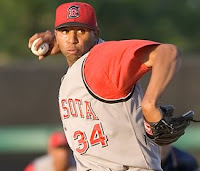 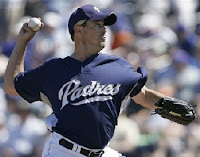 Obviously, Thompson has very unorthodox mechanics, but he certainly made them work in 2008. Even so, it's not difficult to see why he suffered a torn labrum earlier in his career, especially when you consider that he seems to be the epitome of a max effort pitcher. As of now, it's almost impossible to know what to make of him, both from a performance and injury risk point of view.

Thompson exploded back onto the scene in 2008. Given that he performed well on several different levels, his emergence is likely for real. Last year, Thompson missed out on the top 25 because I had concerns about his velocity. However, he dispelled those concerns quickly and ascended rapidly up the ladder. For 2009, Thompson will compete for the 5th spot in the MLB rotation. If he misses out, then he'll head back to triple-A Louisville despite not really needing any more development time. Thompson's ceiling seems to be that of a #4 starter, so for now he checks in at #11 on the list.
Posted by Lark11 at 9:24 PM