Obviously, I was wrong when I said that Adam Rosales was the most challenging prospect to rank. Hands down, Juan Duran and Yorman Rodriguez are the winners in that department. It's almost impossible to rate or evaluate such young prospects, who are still maturing and developing physically. While they have tremendous tools for their age, they have a lot of developing to do before they reach the majors. Even so, it's great to have two more potential impact prospects in the system, as it is evidence that the Reds are really focusing on improving the farm system and building from within.

The Reds have finally gotten aggressive in their international scouting, which paid off when they reeled in two of the best international prospects in Juan Duran and Yorman Rodriguez. However, there still isn't a great deal of information available on either. 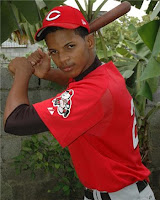 Juan Duran is a 16-year old outfielder from the Dominican Republic. He has the blend of youth, size, and athletic skills that scouts dream on. The Reds found a loophole in the rules that allowed them to sign Duran earlier than was commonly believed by the competition. The Reds signed him for $2M and assigned him to the Billings Mustangs of the Pioneer League, though they never intended to have him play there. Given his age, the Reds are likely to keep Duran in the Dominican Republic for the foreseeable future. In fact, he played in the Dominican Summer League in 2008.

Duran played in 41 games for the DSL Reds, posting a line of .215/.340/.319/.658 with 1 homerun and a 47/24 K/BB ratio. Obviously, the isolated on base percentage is nice, but he also struck out once every 2.9 at bats. Even so, little of value can be gleaned from the stats, as Duran is so young and the sample size is so small. The scouting reports are more revealing.

One AL international scouting director called him "one of those guys who don't come around very often."


"He's got all the tools," he said. "He's a pretty good player, very advanced for his age. I think it was a good investment. He's a good athlete, he has above-average power right now and he has a chance for 80 power (on the 20-80 scouting scale). He demonstrated every ability that you like to see in a kid. He's a very outgoing kid, good swing. There's no doubt about his approach, bat speed and power . . . he has all the common denominators you like to see, good balance, rhythm and a pretty good idea of what to do at the plate.

"If he has to go to a corner (outfield position), he certainly has the power to go there. But right now I'd give him every opportunity to play center field because he's light on his feet and has a good idea how to play out there. He's probably 6-foot-6, 195 pounds, somewhere in that area, so he could gain a whole 40 pounds with no problem. You look at this guy, and you hate to compare guys to major league players, especially at his age, but he could be a young Dave Winfield in the making."

It goes without saying that a Dave Winfield comparison is very, very high praise, but with it comes very high expectations. While Duran is largely a mystery man, there is a bit of video on him. Here is a clip of him from the instructional league. It's short on action, but it does give us a look at Duran at the plate.

Obviously, this video clip isn't the best, as Duran doesn't swing during the at bat. However, a few things jump out at me when watching this clip. First, Duran is a very tall kid. Second, he looks like a kid who has grown so quickly that he isn't yet accustomed to his new body. His stride looks more than a little bit awkward, as does his habit of taking his bottom hand off the bat as the pitch hits the catcher's mitt. He just looks a bit raw and uncomfortable at the plate. If you pair this video clip with his stats in the DSL (which show a lot of walks and strikeouts), it seems clear that he just doesn't swing very much. At this point, it's too early to say whether he's a purposely patient, discerning hitter or if he just isn't very aggressive at the plate. However, from this clip he doesn't look like he has a clear idea of what he wants to do at the plate, which wouldn't be surprising given his age and experience level.

Given his size and reputation, it's easy to imagine him filling out and becoming a big-time power hitter. However, his size also raises the question of whether he'll ever be able to hit for a high average, as tall hitters have longer arms, longer swings, and bigger strikezones. Even so, everything is up in the air on Duran right now. Duran seems more like the traditional slugger than Yorman Rodriguez, who seems like a more well-rounded player.

At this point, I don't feel comfortable rating Juan Duran any higher than #18. I just need to see how he fares in a full season league against established competition. He is so far from the majors that it is impossible to know what to expect, as he has a lot of development left to do. He's all projection and no track record. He could be the next Vladimir Guerrero, the next Wily Mo Pena, or the next player who never even made a name for himself. It's just too soon to tell. It's easy to get excited about such a highly regarded prospect, but it's a long road to the majors.

For now, Duran checks in at #18, but he could skyrocket once he gets a chance to prove himself.
Posted by Lark11 at 9:34 PM