In last year's write up, I thought Carlos Fisher projected better as a reliever. In 2008, the Reds made that a reality, as they switched him to the bullpen where Fisher performed admirably. After years of ineptitude in pitching development, the Reds are finally beginning to build a pipeline of quality pitching prospects. Inevitably, when that happens, the second tier pitching prospects are shifted to new roles in the bullpen. In the past, the Reds struggled to develop starting pitching, so they rarely shifted pitching prospects to bullpen roles for which they were better suited.

Fisher is one of the second tier prospects that is adding quality depth to the organization and may ultimately end up being a valuable member of the Cincinnati bullpen in the years to come.

The Reds sent Fisher back to double-A Chattanooga to start the 2008 season. However, this time he went back as a reliever. In 2007, he started 21 games at Chattanooga, but in 2008 he didn't start any games, instead working 36 games in relief. 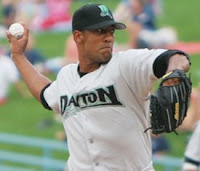 For the Lookouts, Fisher pitched 50.2 innings and posted a 3.73 ERA, 1.42 WHIP, and a 46/20 K/BB ratio. He posted an 8.3 K/9, 3.6 BB/9, and a 1.89 GB/FB ratio. Overall, he demonstrated a nice combination of groundball tendencies and strikeout ability. Ideally, his walk rate would be lower, as walks can be more damaging for relievers than starters, especially those relievers who work in high leverage situations.

Fisher's strong performance earned him a late season promotion to triple-A Louisville. At Louisville, Fisher worked 17.1 innings and posted a 1.04 ERA, 1.33 WHIP, and a robust 21/9 K/BB ratio. He posted a 10.9 K/B, 4.7 BB/9, and a stellar 2.44 GB/FB ratio. Obviously, it was a much smaller sample size, but Fisher continued to demonstrate a power arm and groundball tendencies against advanced competition. It's one thing to do it against unpolished, young prospects, but it's another thing entirely to do it against advanced, polished prospects.

The Reds are likely to send Fisher back to triple-A Louisville to begin the 2009 season, where he will look to continue growing as a reliever.

Fisher works with a 91-93 mph heavy sinking fastball and a cutter. As a starter, he also feathered in a below average change-up, but as a reliever he can lean more heavily on his two best pitches.

In last year's report, I talked a lot about Fisher's mechanics, but we'll revisit it a bit more in this year's report. Fisher is a big tall, athletic pitcher with the body type that scouts favor. Overall, Fisher has fairly clean mechanics, but he does have a bit of effort in his delivery.

One of the more interesting aspects of his delivery is the hesitation in his stride. As his Glove Side (GS) leg descends from the leg kick, his GS foot actually twitches back towards his Pitching Arm Side (PAS) shin, which creates a slight hesitation before his body drives toward the plate. The hesitation works as a timing mechanism, which allows him to gather his momentum and increase his load before he drives to the plate.

Here is a frame-by-frame look at his delivery:

In frame 1, Fisher has a standard starting position. You can see that he is a big, imposing figure on the mound. He has the size and frame that scouts love.

In frame 2, Fisher has taken a small initial step towards first to begin his windup. You can also see his hand position, which is only at his chest, as he doesn't bring them up over his head in his windup. In frame 3, Fisher has begun his leg kick and shows good body control and posture.

In frame 4, Fisher is at the apex of his leg kick. His knee is much higher than parallel and he has rotated his hips to coil up his body. In frame 5, Fisher has begun to uncoil and is on the verge of driving towards homeplate. It is at this point in his delivery that he uses the hesitation move with his GS foot, which helps gather his momentum before driving to the plate.

In frame 6, Fisher has driven off the mound and planted his GS foot. You can see from the position of his throwing arm that he uses an over the top arm slot, which when coupled with his 6'4 frame allows him to really pitch on a downward plane. In frame 7, Fisher has delivered the pitch. You can see that his plant foot is pointed directly at home plate and his upper body is directly over his plant foot. When his PAS leg comes around, it will land next to his GS leg and his body will be squared up and finish in good fielding position.

It's refreshing to see the Reds shift Fisher to the bullpen, as he just profiles better out of the bullpen. Lately, it seems the Reds have been very deliberate in advancing their prospects up the ladder and rather hesitant to move their prospects to positions better suited to their skill-set. They recognized that Fisher's repertoire wasn't likely to lead to MLB success.

To me, the best case scenario for Carlos Fisher is becoming a Scott Sullivan type reliever. And, in my book, that's high praise. I think Scott Sullivan was tremendously underrated. He wasn't a "high profile, big money" closer, but he was a rubber-armed reliever who could eat up innings, get the groundball when needed, and provide a lot of stabilizing middle relief innings. Unfortunately, relievers these days don't typically throw 100+ innings in a season, but I could see Fisher having that type of ceiling. If he reaches it, then he could prove to be invaluable to the Reds. Unfortunately, most prospects don't reach their ceiling and Fisher more likely ends up being a cup-of-coffee type middle reliever at the big league level.

Fisher isn't an elite prospect and likely won't be an impact pitcher at the MLB level, but he does have some interesting attributes. If he can continue to work on his weaknesses and build on his strengths, then he could be a valuable member of the Reds bullpen. His power arm and heavy groundball tendencies are ideally suited to Great American Ballpark. He hasn't arrived yet, but Fisher is close. For now, he checks in at #22 on the list.
Posted by Lark11 at 8:16 PM