system. It's a testament to the renewed strength of the Reds farm system that they have so many intriguing relievers. To me, the old axiom that "relievers are failed starters" rings true. If you don't have quality starting pitching prospects in the system, then those prospects better suited to relief will still be used as starting pitchers. Once you get quality starting pitching prospects, then the lesser prospects can be shifted to relief roles. As for Stewart, the Reds were able to keep him in the relief role that he filled in college and may advance him quickly through the farm system.

Stewart spent three years in college, spending time at three separate universities. Stewart distinguished himself at Texas Tech, after stints at North Central Texas College and a semester at Angelo State University. Scouts were impressed by Stewart, despite the fact that he only posted a 4.98 ERA, 1.47 WHIP, and 43/21 K/BB ratio in 47.0 innings. Clearly, a 4.0 BB/9 and 8.2 K/9 aren't bad ratios, but they're hardly eye-popping. Obviously, it was the live arm that impressed the scouts.

Stewart features two primary pitches: a heavy fastball that sits in the 95-97 mph range and an average slider with plus potential. His fastball also has good movement, which improves its effectiveness. Scouts rate him as having plus control, but his walk rates seem to suggest otherwise. It may well be that he has plus command of his fastball, but mediocre command of his slider. Obviously, a larger sample size will reveal more about his control.

In addition, scouts are impressed with his demeanor on the mound, believing that he may have the right temperament to work high leverage innings. The Reds have Francisco Cordero under control through at least 2011 and an option for 2012, but scouts believe that Stewart profiles well as a closer in the future.

The Reds selected Stewart with the 84th overall pick in the 3rd round of the 2008 draft. Personally, I found the selection a bit curious, as college relievers are often more volatile and lower ceiling than other prospects. In addition, the Reds didn't have a second round draft pick, so it would seem to be more advisable to select a prospect with higher upside. That said, the selection did get good reviews from Baseball America, so only time will tell.

To me, there are two questions on Stewart. 1) How good is his control? 2) How much of his 2008 success was achieved simply by overwhelming a lower level of competition with a plus fastball? The answers to those questions will determine just how successful he'll be in 2009 against more advanced competition and just how quickly he'll arrive at the MLB level.

Stewart is reputed to have pretty clean mechanics. However, after taking a second and third look, a few potential red flags jump out at me. But, let's start off with the good. First off, Stewart has a smooth delivery and a free-and-easy arm action. Despite his high velocity, he's not a max-effort type pitcher. He has a strong leg kick that includes some coiling of the body and bringing his knee up to his chest. 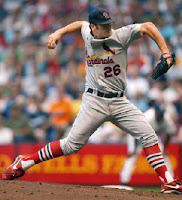 Unfortunately, the free-and-easy arm action comes with a cost. The reason his arm action looks so syrupy smooth is that it's long in the back. After he breaks his hands, he's slow to get his arm up into throwing position. Part of the reason for this is that he gets his throwing elbow up a bit too high, bringing it up above shoulder level. This arm action forces his arm to lag behind, as it takes longer to bring it up to throwing position. The general rule is that a pitcher should have his pitching arm up into throwing position when the plant foot lands. That's not the case with Stewart, whose long arm action can cause his pitching arm to lag behind and not be in proper position when his plant foot lands. In fact, at times his pitching arm is almost parallel to the ground when his plant foot lands (Stewart's arm action is similar to that of Anthony Reyes in this photo, though less extreme. You can see that Reyes' plant foot is down and that his pitching arm is still almost parallel to the ground. Also, his pitching elbow is above shoulder level). The lag adds stress to the arm and hinders his ability to maximize the power generated by his leg drive. Accordingly, instead of throwing with his entire body, he throws more with just his arm, which is the more stressful way to generate velocity.

Overall, Stewart has the potential for an increased risk of injury over the course of his career. Fortunately, Stewart's role as a reliever will limit his workload and help prevent injury.

You can see his MLB draft scouting video here.

Stewart is an intriguing power arm. Unfortunately, he comes with several significant question marks. His mechanics may increase his injury risk and he may not be able to effectively command his secondary stuff. It'll be interesting to see how he fares in a larger sample size against more advanced competition. For now, Stewart checks in at #15, but given his dual risk, both performance and injury, I have a few doubts about his future. That said, he has a very live power arm and could advance quickly up the ladder if he demonstrates good command.
Posted by Lark11 at 3:41 PM