It hasn't taken long for Keppinger to impress his new squad, as he's off to a .435/.500/.739/1.239 start with the Houston Astros. Obviously, that's not a sustainable level of production, who long ago established his performance baseline. Keppinger is an early count, high contact hitter without much pop. He provides some defensive versatility, but his defensive value can accurately be described as being a "jack of all trades, but a master of none."

In addition, as his service time increases, Keppinger salary also increases, so the Reds were obviously looking to shed salary and trade Keppinger's value for a younger model. Despite his hot start, it's clear what the Astros received in the deal, but what exactly did the Reds get? 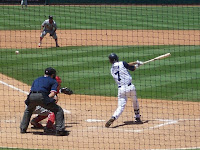 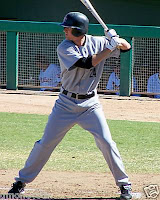 Sutton is a switch hitter who, at 6-3, is tall for a middle infielder. He has a long, lean body type and moves gracefully in the field with long strides. At the plate, Sutton uses a wider than shoulder width stance and still takes a small forward stride to transfer his weight and spread out even further. Sutton hits from an upright position with a high back elbow and gets good extension in his swing, which has a slight uppercut and produces line drives at a good rate.

As for his hitting approach, he has good control of the strike zone and isn't afraid to let the ball travel deep in the zone. Sutton draws walks at a very good clip, but also generally makes solid contact when he offers at the pitch.

In the field, Sutton is very versatile. Unfortunately, that's probably as much a result of his inability to master one position as it is his ability to play multiple positions. His range is rather stretched at shortstop and his bat probably doesn't play well at third, but his ultimate ceiling is that of an offensive minded second baseman who provides league average defense. Even if he doesn't reach his ceiling, Sutton could still prove to be a valuable utility player off the bench.

Last year, Sutton really put it together and posted his best season as a professional. For

Still, Corpus Christi is a fairly neutral park, so Sutton was still impressive. The power numbers get a bit of a boost in Corpus Christi, but Sutton earned his production with a rock solid 22% line drive rate. His stellar season came just in time to reinvigorate his prospect status, as his star was fading fast.

In his career, Sutton has a .282/.377/.441/.818 slash line. It'll be interesting to see what happens in 2009, as Sutton has started his Reds career off with triple-A Louisville and his performance will provide an important data point.

At this point, if I had to rank him, I'd probably slot Drew Sutton in at #21 just below Zack Cozart. If he can build off of his stellar 2008 season, then he could still prove to be a starter at the big league level. However, his age and league average (at best) defense will work against him, and may ironically leave him with a career similar to that of Jeff Keppinger. Even so, it was a good acquisition by the Reds, as middle infielders with plus on-base skills don't grow on trees and Keppinger simply no longer had a defined role with the Reds.
Posted by Lark11 at 11:10 AM