The Reds, Homer Bailey, and a Foolish Decision

During his latest stint in the majors, Homer lasted 4.1 innings, giving up 6 earned runs, 6 walks, and 1 home run.

Homer faced 22 batters, but only threw a first pitch strike to 8 of them. In addition, of his 95 pitches, only 3 resulted in swings-and-misses. It's difficult to fathom how someone who has been reputed to have plus stuff can have such difficulty avoiding bats. The other 92 pitches resulted in called strikes, balls, foul balls, or balls in play.

To me, this result seemed entirely predictable. Despite his reputation as a flame throwing Texan, Homer has never flashed plus stuff at the MLB level and his lack of command only serves to compound the difficulty in avoiding bats. Homer is not ready for the majors and yet the Reds continue to hinder his development and eviscerate his trade value by bouncing him back and forth between the majors and the minors.

It's difficult to see the decision to promote Bailey as anything other than shortsighted for two main reasons: 1) It was all risk and very little reward, and 2) You need to make the prospects earn their promotions.

The vast majority of player personnel decisions are a balance of risk and reward, cost and benefit, downside and upside. Looked upon in those terms, the Homer decision was essentially all risk and very little reward.

Here was the situation:

Homer's previous struggles at the MLB level had left him with greatly diminished trade value and revealed him to be unready to face major league hitters. Obviously, he needs more development time, which is why he was in triple-A to begin the season. In addition, his performance at triple-A Louisville was very uneven.

For Louisville, Homer had a 4.57 ERA in 45.1 innings with a 43/17 K/BB ratio. Not bad, but not great. He has also allowed 9 home runs, which is rather disconcerting. When you add in his past difficulties at the MLB level, it was hardly the type of performance that would warrant a promotion. Not only was his performance not worthy of promotion, but there were other reasons why it made little sense.

If the Homer had pitched well during his most recent promotion, then the Reds would have likely found nothing more than a solid back of the rotation pitcher for the remainder of the year. It's not likely that he would have emerged as the next Tim Lincecum or Zack Greinke. In addition, there would have been a small improvement in Homer's trade value. Still, the likely upside was minimal. Given that the Reds had other options for rounding out the rotation and the fact that Homer's trade value would likely have increased a similar amount if he maintained consistent success in the minors, it's difficult to see much of an upside or reason to justify the promotion.

Given just how little there was to be gained from Homer putting up a quality spot start, it's difficult to understand why the Reds chose to promote him.

In addition to the risk/reward balance tilting heavily towards the former, the promotion raises a legitimate question about the player development philosophy in use. 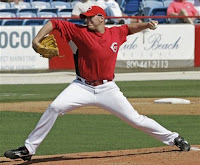 You'd like to think that the Reds would force their prospects to EARN their promotions. What type of message does it send to the prospects who both work hard and perform well only to see the team promote bigger name, but lesser performing prospects? The one name that leaps to mind is Matt Maloney, who outperformed Homer at Louisville. Unfortunately, Maloney just never seems to be in the organization's plans and getting passed over this time probably only reinforces that idea in his mind.

For Louisville, Maloney has a 2.28 ERA in 51.1 innings with a 41/7 K/BB ratio. In addition, Maloney has the advantage of being a southpaw, an attribute currently lacking in the Reds rotation. In terms of who has actually earned the promotion, you'd be hard pressed to make the case for Homer over Maloney. Given that Maloney is 25 years old and performing well at the highest level of the minors, it's time to give him an opportunity to pitch at the MLB level.

At this point, maybe it's not fair to be at all critical of the organization. Maybe the blame should be laid entirely at the feet of Homer Bailey. In fact, it's getting closer to the time where we need to write off Homer Bailey entirely. We aren't there yet, as it makes no sense to cut ties or give him away in trade, but the Reds would be very wise to send him to Louisville for the rest of the season. The Reds need to come to two different realizations: 1) Homer is just not ready to be an effective MLB pitcher and 2) they are doing more harm than good by trying to force him into being one before he is ready.

If the Reds are going to get anything of value out of Homer Bailey, then they need to let him continue to develop in the minors and force him to earn his way back to the majors. Constantly bouncing him back and forth between Cincinnati and Louisville is ruining any chance they have to get value out of Homer Bailey. Let's hope they don't do it again.
Posted by Lark11 at 8:59 AM