Is it time for Paul Janish to start full time?

There was an interesting blurb on MLB.com Reds Beat Writer Mark Sheldon's recent "Inbox." The title was the question: "Returning starters on short leash?"

It's an interesting question and one that may need to be explored a bit further. Sheldon's answer was that Dusty Baker had already indicated that Alex Gonzalez and Edwin Encarnacion will both reclaim their starting jobs. I've expended enough energy talking about the litany of problems with Edwin Encarnacion at third. For now, the more interesting question centers around the shortstop position. 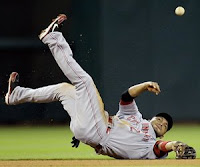 In the article, Sheldon states that A-Gon will be the starter because he is "earning $5.3M" and "is one of the best defensive players around, even when he doesn't hit." At this point, it's fair to question whether that's still true. A-Gon missed more than a season with a compression fracture of the left knee. He didn't play a single game in 2008, so after all that time away it's a reasonable question whether he has lost a step (or two) to age, rust, and injury.

As of now, A-Gon may not be the best offensive or defensive shortstop on the team. It's a small sample size for both, but so far Janish is vastly outpacing A-Gon in both aspects of the game. 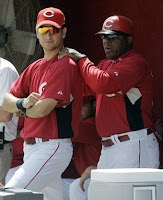 On the defensive side, Janish is outclassing Gonzalez. Under UZR/150, which is the number of runs above or below average a fielder is on defense, Janish has a +14.4 at shortstop, while Gonzalez is scuffling along with a -13.3 rate. I'm not a math major, but if each player maintains that level of performance over the course of the season, then that would result in a net difference in run prevention of 26.6 runs. A win is considered to be worth roughly 10 runs, so that would be a 2.6 win difference going from Janish to Gonzalez.

Under John Dewan's +/- metric, Janish is at +2 with a runs saved mark of +2, while A-Gon is at -4 and a -3 runs saved mark. Defensive statistics aren't perfect, but when multiple metrics reveal similar results it's easier to be confident in the results.

At present, Janish not only has the advantage with the leather, but he also provides a significantly higher level of offensive production. Even if Gonzalez turns it around with the lumber, his offensive advantage over Janish would still likely be negligible.

Obviously, the comparison is based on a very small sample size and is evidence of absolutely nothing, but at the very least the Reds should be keeping an eye on the situation. If Alex Gonzalez doesn't get it together soon, then a switch to Paul Janish could increase the team's win total by 2.5-3.0 games. If Gonzalez doesn't get it together, how long can a team without much margin for error continue to stick with him?
Posted by Lark11 at 8:27 PM