Zach Stewart Blowing Everyone Away

In the Reds organization, one the brightest lights of the 2009 season is Zach Stewart.

Stewart was drafted out of Texas Tech, where he worked primarily as a closer, but did log some time as the team's Friday night starter. When they drafted him, it seemed likely that the Reds envisioned him as a polished reliever who could move quickly up the ladder. Even if that's the role they envisioned for Stewart, they still put him in the starting rotation to start the season. It could be a sign that the Reds view him as a starter or it could be nothing more than a development strategy.

Many organizations decide to use all of their best pitching prospects as starting pitchers, even if some ultimately project as being relievers. This is a player development strategy that allows the prospect to work long outings, develop additional pitches for their arsenal, and get regular work between starts. The main advantage is the last one, as prospects who work as relievers are unable to get consistent work in between appearances as they never know when they will be called on to pitch in the game. Regardless of the reason why he's in the rotation, now that he's there he may never relinquish the role.

Stewart went to high-A Sarasota to start the season where he was truly overpowering. In 42.1 innings and 7 starts, Stewart posted a 2.13 ERA with a 32/8 K/BB ratio, 2.42 GB/FB ratio, and a 1.30 WHIP. He still features a nasty fastball and a hard biting slider, but as a starter he is working on a third pitch: his change-up. His slider always had plus potential, but early reports on it have been very strong. The other obvious plus in his early season performance is just how many ground balls he is inducing. His fastball has good sinking action to it and hitters are beating the ball into the ground, which is a big plus considering that he'll soon be pitching in the launching pad that is Great American Ballpark.

His stellar early season performance for Sarasota recently earned him a promotion to double-A Carolina. He quickly proved that he brought his success with him, as he has yet to allow a run in his first two starts. In 11.0 innings, Stewart has a 0.00 ERA, 1.00 WHIP, 10/2 K/BB, and a 3.20 GB/FB ratio. Even though the jump from high-A to double-A is often considered the most difficult jump in the professional ranks, Stewart was clearly unfazed.

Stewart made a start tonight which was notable in two respects: 1) He didn't allow a run and 2) he only pitched 4.0 innings. It's unclear why Stewart worked in only 4.0 innings, as he threw 7 in his double-A debut and was cruising tonight, so hopeful it's not an injury. I still worry that he may be a bit of a heightened injury due to his power stuff and pitching mechanics.

Here are a couple of photos of Stewart pitching for Sarasota (courtesy of Jim Donten) which were taken on April 22, 2009 when Stewart faced the Charlotte Stone Crabs. 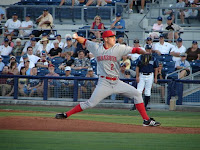 In the photo on the right, you can see that Stewart's plant foot is on the ground, but his pitching arm is not yet up in throwing position. A general rule of thumb is that the pitching arm should be up in throwing position when the stride is completed. Here, the arm seems to be a bit late, which could add additional stress to the arm. If the body isn't completely in sync, then the arm may have to carry more of the stress generated by the already unnatural act that is pitching. Hopefully, this isn't something that will hinder Stewart, but it does seem like his arm is still slightly lagging behind in his delivery.

So far, Stewart's 2009 season has been an unqualified success. Given the lack of impact pitching prospects in the system, it's rather obvious that Stewart should be given every opportunity to prove his ability to handle a starting role. The Reds will likely select a pitcher in the 1st round of the upcoming draft, but for now Stewart is running neck and neck with J.C. Sulbaran for the title of best pitching prospect in the system.
Posted by Lark11 at 9:38 PM