Dustin Ackley is the best pure hitter in the 2009 draft. 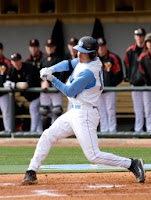 He stands 6-1 tall, tips the scales at 185 lbs, bats left, and throws right. He's currently a draft eligible junior at the University of North Carolina.

Ackley first caught my eye as a freshman at the University of North Carolina. Even though he was a 19 year old getting his first taste of collegiate ball, he still seemed like one of the best hitters in Division I. He hit a robust .402 with a .448 OBP and .591 slugging percentage....again, as a freshman.

At this point, almost all the mock drafts project Ackley as the consensus #2 overall to the Seattle Mariners. Of course, he's not a lock to go #2, but it seems a pretty safe bet. Well, as safe as can be when the Mariners are involved, as they have a bizarre tendency to draft high upside starting pitchers only to convert them into relief pitchers. So, you never really know what they'll do.

At the plate, Ackley has just about everything you want in a hitter. His bat speed is tremendous and he possesses great bat control as well. He can drive the ball to all fields and has no problem hitting the ball where it is pitched. He has a high contact rate and controls the strike zone very well. His strong pitch recognition prevents him from getting fooled and out on the front foot on breaking balls.

There is debate about how his power will translate at the MLB level and he'll never be a big time power hitter, but at the very least he should be good for ~15 homers. Even if he doesn't sport more power than that, he will undoubtedly continue to be a pure hitter at the major league level.

Here is a clip of Ackley hitting a grand slam despite breaking a metal bat on the pitch.

Ackley not only possesses a tremendous hit tool, but he also has sneaky fast speed. Not only is he fast, but he also has good instincts on the base paths, which allows him to utilize his speed effectively. 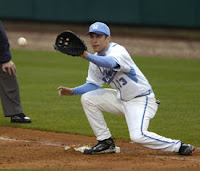 The one red flag on Dustin Ackley is that he had Tommy John surgery last summer, which limited him strictly to 1b in 2009. Ackley has the speed and defensive skill to play centerfield, but his arm injury has not allowed him to get back out there yet. That said, there is a good chance that he'll be able to revert back to centerfield in the future, which will only increase his positional value. Obviously, his bat would play better in center and any potential power shortage would cease to be a problem if he is able to move up the defensive spectrum.

At this point, I'd be surprised if the Mariners didn't select Ackley. However, his well diversified offensive game and solid defensive skills would be a great addition to the Reds organization. The baseball draft is more susceptible to players sliding than the other major sports, so anything is possible, especially with so many of the top prospects being represented by Scott Boras. Ackley is a long shot, but he's worth keeping an eye on.
Posted by Lark11 at 9:58 PM