As unbelievable as it seems, Aaron Harang is STILL undervalued around Major League Baseball. so he qualifies for our team. Maybe it's because he pitches in Cincinnati, doesn't light up the radar gun, or just lacks an oversized personality, but whatever the reason Aaron Harang isn't appreciated like he should be. 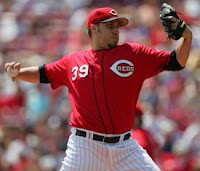 The Reds stole Aaron Harang from the A's, trading Jose Guillen to the East Bay for Aaron Harang, Jeff Bruksch, and Joe Valentine. It was hands down the best Reds trade in the past 15 years, but it was completed by co-interim GMs Brad Kullman and Leland Maddox. Krivsky has made some solid trades, but the Aaron Harang trade is beyond compare.

Harang attended San Diego State University and was drafted by the Rangers in the 6th round of the 1999 draft. In 2000, the Rangers subsequently traded him to the A's along with Ryan Cullen for Randy Velarde.

Harang spent parts of two seasons in Oakland, but was made expendable by the presence of Tim Hudson, Mark Mulder, Barry Zito, Ted Lilly, and Rich Harden. Surprisingly enough, Harang is now indisputably the most valuable pitcher out of the entire group. Harang has become a legitimate #1 starter and the linchpin of the Reds rotation.

I'm not sure there's ever been a less heralded #1 starter in baseball. Harang has posted 3 consecutive seasons of stellar production. In fact, he's actually gotten better in each of the least four seasons.

Over the past four seasons:

In 2007, Harang threw a first pitch strike 66% of the time and 67% of all of his pitches were strikes. In addition, only 3% of opposition plate appearances resulted in a 3-0 count, while 24% of opposition plate appearances resulted in an 0-2 count. Harang threw first pitch strikes often and rarely fell behind, which helped him posted an NL best 4.19 K/BB ratio.

On top of it all, Harang has somehow managed to do it in front of a porous defense in a bandbox home ballpark. It's scary to think of the numbers he would put up in front of a top flight defense or a more pitcher friendly park. In 2007, the Reds as a team had a DER of only .679, which was well below the NL average of .691. In short, the Reds turn far fewer balls into outs than other defenses in the NL, which drags down the numbers of the entire pitching staff, Harang included.

On top of it all, Harang isn't just an ace, he's also a workhorse, logging a total of 677.2 innings 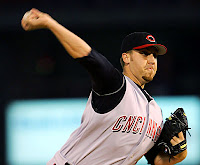 over the last three seasons. So, he doesn't just provide a high level of production, he provides a massive amount of that production. A pitcher's impact is not just a function of his performance, but also his workload.

Rich Harden can pitch at a Johan Santana like level, but it's largely irrelevant because he can't handle a workload heavy enough to maximize his impact. Barry Zito can handle a very heavy workload, but doesn't perform at a very high level anymore, so his impact is minimized. Harang, on the other hand, performs at a very high level and works a lot of innings, which maximizes his impact on the fortunes of the Reds.

Jake Peavy won the NL Cy Young Award in 2007, but it's fair to wonder if Harang would've won it if he and Peavy swapped teams. Again, in 2007, the Reds had a .679 DER, while the Padres posted a .701 DER. In addition, Petco Park is the best pitcher's park in baseball, while Great American BallPark is one of the worst. Peavy would probably still be a tick better, but it wouldn't be by much. Harang is that good.

At this point, I'm not sure what Harang has to do to earn the respect he deserves, but it will probably take the Reds making the playoffs. At that point, maybe the national media would wake up and realize what they have been missing. Until that time, Aaron Harang can comfortably headline the All Undervalued Team.
Posted by Lark11 at 2:59 PM