There are some odd, yet interesting happenings between Major League Baseball and the Umpires these days. So odd, in fact, that civil rights leader Jesse Jackson was even compelled to comment. 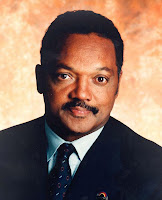 World Umpires Association president John Hirschbeck and union spokesman Lamell McMorris said Wednesday that Tom Christopher, the Milwaukee-based supervisor of security and investigations in the commissioner's office, had asked questions about Klan membership to neighbors of umpires Greg Gibson and Sam Holbrook, who reside in Kentucky.

In addition, Hirschbeck said similar questions had been asked of neighbors of umpire Ron Kulpa, who lives in suburban St. Louis.

"In a year with the injustice of Jena Six, nooses hung around the country and the Tiger Woods-Golfweek scandal, Major League Baseball's false impersonations of friendships and ill-contrived questions further press sensitive racial stereotypes, with no basis for suspicion," Jesse Jackson said. "They have essentially defamed their people in their own neighborhoods."

Baseball stepped up background checks last August, after it became public that the FBI was investigating then-NBA referee Tim Donaghy for betting on games. Donaghy pleaded guilty to felony charges of conspiracy to engage in wire fraud and transmitting betting information through interstate commerce, and he awaits sentencing. He has since resigned from his job as a referee.

As mentioned, the recent scandal in the NBA involving Tim Donaghy is the obvious driving force behind the increased scrutiny of the umpires. However, this bizarre Ku Klux Klan revelation makes me wonder what else is at work, as KKK membership has nothing to do with financial impropriety.

Involvement in gambling by a referee or umpire is of obvious concern, as his professional integrity could be comprised by rising financial debt. However, it's clear that MLB has expanded the scope of its investigations to cover all aspects of professional integrity, not just financial impropriety. However, one wonders why MLB would think to include race in its investigations. Is it possible that any recent events have necessitated this type of inquiry?

Thinking back over recent events in Major League Baseball, it's hard not to stop at one in particular. 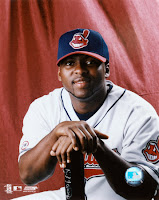 On September 23, 2007 San Diego Padre Milton Bradley was involved in an altercation with first base umpire Mike Winters. Normally, most would be quick to dismiss it as nothing more than another in a long line of Milton Bradley meltdowns, however there was more to it than meets the eye.

In the 8th inning, Bradley singled off of Rockies starter Jeff Francis. As Bradley reached first base, he engaged in a conversation with Mike Winters that became heated. The situation quickly escalated and Bradly had to be restrained by seemingly half of San Diego. Ultimately, Bradley was wrestled to the ground by his own manager Bud Black. In the struggle, Bradley ended both his season and the Padres season when he tore ACL and MCL in his knee.

Predictably, the aftermath boiled down to a "he said, he said" situation, Padre first coach Bobby Meacham was unwaivering in his support for Bradley and his comments are very telling.

"In 26 years of baseball, I can honestly say that's the most disconcerting conversation I have ever heard from an umpire to a player," Meacham said. "It was almost like he wanted to agitate the whole thing. He wanted to get Milton boiling for some reason. Milton, he held his cool. I was just appalled." 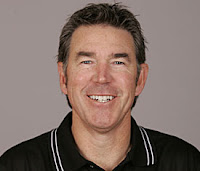 Major League Baseball launched an investigation and while it was never revealed exactly what was said, the results speak for themselves. Winters was suspended, while Bradley was not.

Whether race played a part in the Bradley-Winters incident will likely never be known, but it's clear that MLB is concerned about racism tainting the objectivity of its umpires. You can debate the wisdom of MLB's decision or tactics, but it seems clear that the character cops have been let loose on the MLB umpires. It remains to be seen whether these comprehensive investigations are justified or effective, but it seems well past time that the general conduct of the umpires was placed under greater scrutiny.
Posted by Lark11 at 7:53 PM