At this point on the list, it becomes difficult to determine who falls where. However, the bloom is

already off the rose for some formerly well regarded prospects (i.e. Paul Janish, Chris Dickerson, and Marcus McBeth) and many of the newer arrivals haven't done enough to warrant inclusion on this list as of yet (i.e. Chris Heisey, Brandon Menchaca, and Alexis Oliveras).

So, Justin Reed gets the nod at this spot. I doubt he'll be ranked in the top 30 on most lists, but I'm still intrigued by his athletic ability and potential upside and look forward to seeing what he can do in 2008.

Reed is 5'11", 179 lbs, bat left, and throws right. He is a tremendous overall athlete, but needs to learn how to translate it into baseball performance. Reed is likely to be slower to develop than most prospects, as he excelled in both baseball and football in high school, which divided his athletic focus. His baseball skills need polish, but he's got the raw ability to become a successful professional ballplayer.

Justin Reed attended Jackson Callaway High School in Mississippi until his senior year when he transferred to HillCrest Christian. Reed also was chosen to be on the roster for the Jr. Olympics. The Jr. Olympics brings all the top high school prospects in the country together and Reed made the Finalist Roster, which is the final 24 man roster. In addition, he hit .550 during the Olympic Trials, which was the 3rd highest out of the 140 players who were invited.

Reed committed to Ole Miss with a football scholarship before the Reds selected him with the 114 overall pick of the 4th round of the 2006 draft and signed him away.

It hasn't been all smooth sailing for Reed since he made his professional debut, but he's shown improvement, which is what you want out of a prospect. Most organizations actually like to see a prospect struggle at some point, as it forces the prospect to learn how to cope with adversity. 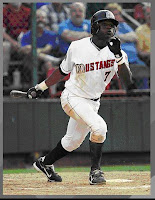 Reed's biggest asset is his speed, which is a plus tool. He runs the 60 yard dash in 6.48 seconds. In addition, Reed understands that his job is to get on base and has posted respectable walk rates. He also has good bunting skills, which allows him to utilize his speed.

Reed has good bat speed, but like many multi-sport athletes, he's still raw at the plate. Reed hits from a slightly wider than shoulder width stance and bounces on his front foot while waiting for the pitch. When the pitch is delivered, Reed takes a short stride and is fairly quick to the ball. He has a level swing that could produce a lot of hard line drives in the future. In addition, Reed is quick out of the batter's box and down the first base line.

On the downside, Reed has a tendency to spin out on his front foot at times, so he'll need to do a better job of staying on the ball and maintaining his balance. In addition, Reed needs to improve his hand position prior to beginning his swing. He doesn't seem to quite get his hands far enough back to be in good hitting position, which is likely to hinder his performance. If he doesn't have a good hand set before firing his swing, then he's behind before he even gets started, which may be part of the reason for his high strikeout rate and difficulty in making consistent contact.

Again, Reed needs to work on his overall game, but the raw abilities are evident.

You can access his MLB draft scouting report here.

As with all aspects of his game, Reed is still raw in the field. Oddly enough, Reed was a catcher for three years in high school, only switching to centerfield in his senior season to take better advantage of his speed. In 2007, Reed only made one error for Billings, but could improve his route running and his reads off the bat, which should happen with experience.

Reed has an accurate arm, but his throws don't have much carry. His arm is only average, but it should be enough to allow him to stay in centerfield. Given his limited experience in centerfield, it's not unexpected that he needs to improve his defensive game. However, he has the tools to become a solid defensive centerfielder.

Reed seems to have fallen off most prospect lists, but his performance does bear watching. Given that he didn't focus solely on baseball until after he was drafted, Reed's struggles are not unexpected. While he may take longer to develop than most, that doesn't mean that he isn't decent prospect. He has been slow out of the gate, but it's not how you start that matters, it's how you finish.

Reed's career will largely be driven by his ability to utilize his speed. If he can put it to use in the field and at the plate, then he could develop into a nice player. Reed has the tools to be both a solid outfielder and an effective table setter, though he'll need to cut down on his strikeouts while maintaining his "late count" approach at the plate. Overall, his 2007 season indicates that he is beginning to figure things out in professional baseball. If he continues to build on his 2007 improvement, then he could take another step forward in 2008.

The Reds are likely to start Reed out at low-A Dayton next year, where he'll need to rise to the challenge to solidify his prospect status. Fortunately, given that Reed will only be 20 years old in 2008, time is still on Reed's side, so for now he checks in at #24 on the list.
Posted by Lark11 at 10:26 PM