All Undervalued Team: Daric Barton, 1b 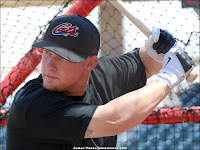 Perhaps not surprisingly, it's most difficult to find an undervalued player at the first base slot. There are fewer skills at work at first base, so there are fewer opportunities to find undervalued players. By and large, firstbase comes down to offense. Clearly, Carlos Pena would have fit the bill prior to the 2007 season, but somehow he doesn't quite fit that label any longer.

I considered Nick Johnson, Casey Kotchman, James Loney, and Joey Votto, but ultimately decided on Daric Barton. Barton may not be too undervalued, but I suspect he's a bit under-appreciated by everyone not in the A's organization. Right or wrong, Barton was slotted behind Votto and Loney among first base prospects, due in large part to his lack of top notch power.

While all of the aforementioned players have their strengths and weaknesses, I went with Barton because he might well be the rarest of the rare: the "late count" hitter who rarely strikes out. 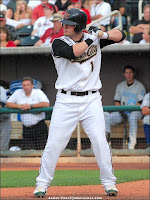 While the strikeout has long been considered the worst possible outcome for hitters, the new wave of statistical analysis indicates that a strikeout is actually not much more detrimental than the aggregate of all the other kinds of outs.

However, that's a bit misleading, as it's not the same as saying that a swing and miss is not detrimental. A swing and a miss can guarantee an out, while contact may or may not result in an out. So, while a strikeout is essentially no worse than the aggregate of the other outs, putting the ball in play is much more advantageous than no contact, as it may not necessarily result in an out. Good things can happen if you put the ball in play, as you don't have a chance of winning the hit lottery, advancing a runner, or benefiting from a fielding error unless you make contact.

While that is all certainly true, there are actually a few ancillary benefits to strikeouts, which include drawing walks and making a pitcher work. By and large, a strikeout requires working deep into the count. If you work deep into the count, then you put yourself in a position to draw a walk. In addition, working deeper into counts can get a team into the opponents bullpen much earlier.

All of these players are late count hitters and have strong walk rates, but also accumulate a substantial number of strikeouts. Typically, there is a degree of correlation between walks and strikeouts. However, the ultimate offensive player (i.e. Albert Pujols) would be one who can drive the ball, walk a great deal, and strikeout very little. Daric Barton is unique, because he might be able to do just that. 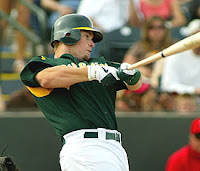 In his 2007 MLB debut, Barton saw 3.83 #P/PA and made contact at an 87% clip. He posted a line of .347/.429/.639/1.068 and displayed impressive power by hitting a homer every 18 At Bats. However, he's unlikely to sustain that level of power in 2008, as he has yet to demonstrate that kind of power in the minors. The power spike is likely the result of a small sample size more than anything else, but Barton does have more power projection. He's never going to be Ryan Howard or Prince Fielder, but he could develop 20-25 homerun power in time.

In his minor league career, Barton has posted a career line of .301/.412/.459/.871. In addition, he has managed to draw more walks (313) than strikeouts (266). Barton has tremendous plate discipline and does a great job of controlling the strike-zone. In addition to his great approach at the plate, Barton has a truly beautiful swing. It's smooth and short generating a lot of line drives.

In 2006 at AAA Sacramento, Barton posted a line drive percentage of 23%. In 2007, he posted a 21% clip at Sacramento and a 25% clip at the MLB level. As it stands, he doesn't have great power, but as he continues to fill out it should improve.

If his power improves a notch, then I could see Barton becoming a real Edgar Martinez type. Barton could be one of the purest hitters in baseball, just like Edgar used to be. And, also like Edgar, Barton could be one of the rare players who can post a career line of .300+/.400+/.500+. If the power doesn't come around, then his high batting average and elite on base skills will still make him a very valuable ballplayer.

As it stands, Barton is a pure hitter who may yet develop the power that enables him to be a complete hitter. His lack of power may have made him a bit undervalued, but even if the power doesn't develop he still has the hitting and on-base skills to generate tremendous production and value.
Posted by Lark11 at 8:40 PM