Hopefully, 24 year old southpaw Tyler Pelland can change that in the very near future.

Pelland, who stands 5'11", weighs 205 lbs, features a four seam fastball that sits at 92-93, but can touch 95. He has an 89-90 mph two seam fastball with good movement. He has a power curveball that at times is a plus pitch, though it remains a bit inconsistent and he still needs to improve his feel for it. He also has a below average circle change-up that he throws in the low 80s with late tumble.

His future seems likely to be in the bullpen, where he can work exclusively with only two pitches and not have to rely on his below average change-up.

Ever since Pelland's arrival in the Reds organization he has failed to live up to expectations, which is due in large part to his control problems. After he came over from the Red Sox in 2004, the Reds sent him to the Gulf Coast League for 2.2 innings and then on to Rookie League Billings.

At Sarasota, Pelland posted a 4.05 ERA, 1.62 WHIP, 5.5 BB/9, and a 9.1 K/9 in 102.1 innings. He split time between the rotation and the bullpen, making 15 starts and 30 total appearances. Control continued to be a problem, as he walked too many batters and allowed too many baserunners in general. The Reds liked what they saw enough to promote him to double-A Chattanooga to start the 2006 season. 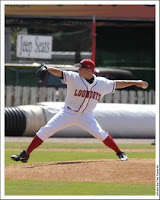 The jump to double-A is often the most difficult in the minors and Pelland, despite his 3.99 ERA, did struggle. He posted a 5.7 BB/9 and a 6.8 K/9 in 142 innings working exclusively as a starter. Again, he allowed far too many baserunners, as evidenced by his 1.64 WHIP. The Reds sent Pelland back to double-A to start the 2007 season.

After returning to Chattanooga, Pelland found better success working almost exclusively out of the bullpen. He made 5 starts, but made 30 appearances out of the bullpen. He posted a 3.95 ERA, 1.44 WHIP, 4.4 BB/9, and a 9.7 K/9. After 66 innings of work, the Reds bumped him up to triple-A Louisville to finish out the season.

At Louisville, Pelland worked 23.2 innings, posting a 3.04 ERA, 1.01 WHIP, 2.76 BB/9, and a 10.3 K/9. It was a small sample size, but it was enough to give the Reds hope that Pelland was finally harnessing his stuff and limiting the extra baserunners that have consistently been his undoing.

In his minor league career, Pelland has consistently struggled to post ERAs below 4.00 and WHIPs below 1.50. His obvious problem is his inability to throw strikes. He struggles with both his command and control, but the move to the bullpen may agree with him. If so, then it may be the key to unlocking his potential by eliminating his need for a third pitch and allowing him to work with more velocity on his fastball. He'll return to triple-A to start 2008, but if he proves that his new performance level is for real, then he'll be in line for a promotion to the majors sooner rather than later.

Several years ago, the late, great Vern Ruhle helped rework Pelland's mechanics, eliminating his cross-fire action. By helping Pelland pitch more directly to the plate, rather throwing across his body, Ruhle helped him improve his curveball. As it stands now, Pelland has fairly sound mechanics.

Pelland has a nice high leg kick and coils his "Glove Side" leg to store up energy. He maintains good tempo and balance throughout his motion, never seeming to rush or get his body out of sync. He doesn't create much drive off the rubber with his lower body, but he still manages to generate substantial velocity. Though his new mechanics eliminate most of the cross-fire action from his delivery, there are still remnants of it in his arm action.

His arm slot and arm action still result in him throwing across his body a bit. The slight cross fire delivery causes him to shorten his arm extension on the follow through, giving it a slightly restricted, unfinished look. Rather than extending out through the pitch after releasing it, Pelland pulls his arm in towards his body in order to accommodate the cross-fire arm action. While his mechanics are free and easy, he has had difficulty maintaining a consistent arm slot which has led to the aforementioned command and control problems.

Here's a video clip of Pelland warming up (my thanks to "farmsystem" from youtube for originally posting this video):

Pelland remains the last best hope for the Reds to salvage something from the Scott Williamson deal. If he has a future, it's clear that it now resides in the bullpen. If the step forward he took in 2007 is legitimate, then he'll be in the Cincinnati bullpen sooner rather than later. However, he'll need to demonstrate that the improved command and control are for real, as that has been, is, and will continue to be, the key to unlocking his potential.

Pelland joins Josh Roenicke, Pedro Viola, Sean Watson, and maybe Carlos Fisher as potential homegrown relievers on the verge of reaching the show. While that's a definite sign of an improving Reds farm system, it also inevitably draws into question the wisdom of handing out such a massive contract to Francisco Cordero to solidify the bullpen.

If Pelland continues to trend upwards, then he may yet carve out a modest career in the middle of a Major League bullpen. If not, then let's at least hope that the Reds enjoyed the cash they received in the Scott Williamson trade, because Phil Dumatrait did them no favors. For now, Pelland's step forward in 2007 earns him the 25th slot on the list.
Posted by Lark11 at 10:32 PM