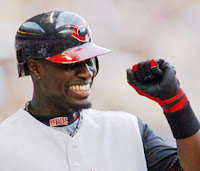 Well, good news, Reds fans. The Reds did what they needed to do and locked up Brandon Phillips to a multi-year contract.

Earlier this offseason, the Reds and Phillips exchanged arbitration figures. Given Phillips' performance in 2007 and the discrepancy between the figures, it was fairly clear that the Reds were going to lose. The Reds offered $2.7M, while Phillips countered with $4.2M. While I do think his 2007 season is being overrated a bit, it's hard to deny that a 30/30 season from a middle infielder would speak very loudly in an arbitration hearing.

Given all that, one has to wonder if the lowball figure the Reds tossed out was designed to signal Phillips that they wanted to get a longterm deal done. It seems like a pretty clear indication that they weren't going to seriously contest the arbitration, but rather were willing to pay Phillips what he deserves. Whatever the reason for the low arbitration offer, the Reds made it a moot point by locking Phillips up to a 4 year contract with a team option for a 5th year.

If Phillips was a free agent this offseason, then he'd likely be in line for a 2008 salary in the neighborhood of $9-10M, so getting him under contract for $11M in 2011 and $12M in 2012 could be a very good deal. On average, salaries increase ~10% per year in MLB, so the Reds are getting his first two free agency years at a well below market rate.

CONTRACTS AND ASSUMPTION OF THE RISK

Contracts in Major League Baseball are all about risk. Since the 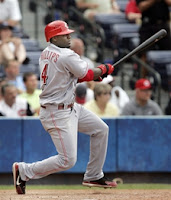 This seems to be a good deal for the Reds, as they limited the risk they assumed by not guaranteeing the 5th year and are likely to be paying below market rates in each year. While the deal itself is a good one for the Reds, it does add another data point to what is a potentially disturbing trend. One has to wonder about the wisdom of signing a player who is under control for three more seasons to a longterm contract right after he has a career best season. The Reds did something similar with Bronson Arroyo and now they've done it again with Brandon Phillips.

Overall, it's a good day for Reds fans, but let's hope the Reds put an end to negotiating long term contracts on the basis of career seasons.
Posted by Lark11 at 3:16 PM