Typically, I don't find a significant amount of value to the written content on MLB.com. As the official site of Major League baseball, it typically doesn't provide the most objective of content. However, as of late, I have found a few articles of note on the Washington National site. 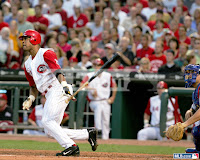 isn't working for the Reds organization. Throughout baseball history, star players who spend their entire playing career with just one organization are very rare. Babe Ruth, Ty Cobb, Willie Mays, and many others played with multiple organizations. In the free agent era, it's even more rare. It requires a bit of give-and-take from both the player and the organization and a healthy dose of luck. However, despite the odds, Barry Larkin and the Reds managed to do just that.

Unfortunately, no sooner had he hung up his spikes, then he was off to work for former GM Jim Bowden in the Washington Nationals organization. Rumor has it that Larkin would not work in the same front office with John Allen, who for years stood in the way of efficient and effective front office dealings in Cincinnati. Larkin's departure is not just unfortunate from a sentimental standpoint, but also from a business standpoint. When he left for Washington, Larkin took a lot of wisdom and experience with him, wisdom that certainly could have benefited the Reds. The stories from the MLB National site reveal just what the Reds are missing.

Larkin has spent a significant amount of time mentoring and teaching the players in the National's organization, which is something that the Reds could use given their renewed focus on player development. Here's a recent article about Larkin mentoring the troubled Elijah Dukes.

WASHINGTON -- A few days before the Winter Meetings started in Nashville, Tenn., Nationals general manager Jim Bowden called Barry Larkin, his special assistant, to ask if Larkin had ever heard of Rays outfielder Elijah Dukes and was he aware of the slugger's troubled past.

Larkin told his boss that he never heard of Dukes. Bowden was looking to acquire Dukes in a trade and the Nationals already had a plan in place to make sure Dukes didn't have any problems on and off the field. One of the ideas was to have Dukes work out with Larkin in Orlando before Spring Training started. Larkin didn't hesitate. He agreed to be one of Dukes' mentors.

After being traded to the Nationals for pitcher Glenn Gibson on Dec. 3, Dukes and Larkin have been working out together ever since. Besides showing plenty of support, Larkin has been teaching Dukes the mental side of hitting. As the season goes on, Larkin will be a sounding board for Dukes, and the topic doesn't necessarily have to be about baseball.

"It's a matter of showing this guy some love. That makes for a very healthy environment to compete and do well regardless of what your personal issues are or may have been," Larkin said. "He smiles when he is here. I think he really enjoys it. I want him to be ready for Spring Training and be in shape. This guy is a physical monster -- strong, fast, quick and all that kind of stuff. He is a stud."

After watching Dukes, 23, work out and hit, Larkin believes that Dukes could be a 30-30 player one day.

"Physically, he is strong enough to hit 30 to 40 home runs. He's probably fast enough to steal 30 to 40 bases. Physically, this dude is gifted," Larkin said. "I think it will be important that he feels like part of [the team] early as it is with any young player that has been traded."

Being a mentor is nothing new to Larkin. As a starting shortstop for the Reds, he was a big brother to players such as Dmitri Young and Austin Kearns. Larkin learned to help his teammates by being around Pete Rose -- his first big-league manager -- Tony Perez, Buddy Bell, Ron Oester and Dave Parker.

"I'm a product of my environment," Larkin said. "I came up with some incredible people, who were not just baseball players, but actual teachers."

Larkin's teachings have paid off. Besides working with Dukes, Larkin taught third baseman Ryan Zimmerman the proper way of playing shortstop. Whenever manager Manny Acta had the shift on a left-handed hitter such as Carlos Delgado, Zimmerman played short and was smooth turning the double play.

"He sent me a text after making a double play. He said that position might be the easiest position on the field to play," Larkin said.

Larkin wasn't just a tremendous player, but he also has an innate 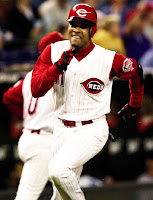 understanding of the game and the ability to impart that knowledge. Last year, Larkin replaced Harold Reynolds as an ESPN analyst on the College World Series broadcasts and provided a significant amount of insight. During one of the games, Larkin talked about the need for players to focus on "winning each baseball event, not just the game itself." For example, during an at bat, hitters should "win" each pitch in order to win the at bat. He should win each at bat to win the inning. He should win each inning to win the game. That's the kind of philosophy that should permeate the Reds organization, but unfortunately Larkin took it with him to Washington.

This offseason, I really wanted to bring Larkin back as the next manager of the Reds, but instead we gave the job to Dusty Baker. It would've been nice to keep Larkin's knowledge and experience in the organization to help our younger players realize their potential and understand how to play the game the right way.