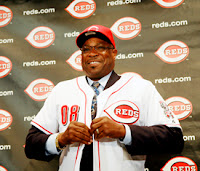 Despite my very best efforts to keep an open mind, Dusty Baker's early comments deserve a mention and a moment of our time. Unfortunately, there is not much positive to point out in the early going, but there are things about which to worry.

Just to recap, when Dusty was hired there was significant rumbling coming from the fan base. People had several concerns about Dusty Baker, which included 1) his history of overworking young pitchers, 2) his penchant for favoring his favorite veterans over younger players, 3) his utter lack of appreciation for the importance of on base percentage, and 4) his inability to handle any criticism.

When his hiring was announced, something rather unusual happened. There was a collective groan from the fans and almost immediately Baker had to answer questions from the media about the aforementioned tendencies. I can't recall any other managerial candidate being put on the defensive immediately upon being hired, so it was rather unique. While the media pressure was unusual, it oddly enough gave me a sense of hope about the hire. If everyone under the sun was questioning Baker and his managerial tendencies, then maybe he would feel the need to change his wayward ways. Unfortunately, the season hasn't even started and Dusty's comments reveal that he really hasn't changed a bit.

Just for a quick recap, the Reds have Adam Dunn in leftfield, Ken Griffey Jr. in rightfield, and Ryan Freel, Norris Hopper, and Jay Bruce in the mix for the centerfield job. In the past, I had concerns about Hopper's ability to handle the job on an everyday basis, but he's grown on me this offseason. It's hard to deny that he's the best candidate for the job if Bruce isn't ready to hold it down. In addition, the Reds are also including Chris Dickerson in the race for the centerfield job, though he's a long shot.

Regardless of the fact that the Reds have a couple of quality options for centerfield duty, Dusty has other ideas.

SARASOTA, Fla. -- Leading off for the Reds, Kenny Lofton?

Lofton is among several free agents still without a team as Major League camps opened for Spring Training. Manager Dusty Baker said on Sunday that he's spoken with Lofton and another veteran center fielder, Corey Patterson.

"They're both out there looking for a job," Baker said. "We have to see if it fits the budget here and all kinds of stuff." 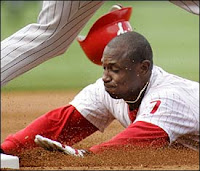 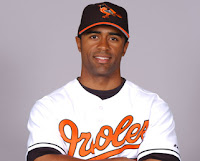 Kenny Lofton and Corey Patterson have several things in common. Both play centerfield, hit left-handed, and have previously played for Dusty Baker. Another thing they have in common is that neither is an appreciable upgrade over the in-house options for centerfield. However, this is yet another example of Dusty loving "his guys." Kenny Lofton was a tremendous player when he was younger, but at age 41 he isn't an upgrade over Hopper and would only serve to clog up the roster and complicate the arrival of Jay Bruce.

Unfortunately, it's also an example of Dusty having no appreciation of the importance of on base percentage. It's truly difficult to fathom that any professional baseball man could conceivably look at Corey Patterson and see a leadoff hitter. For his career, "C-Patt" has a line of .258/.298/.414/.712, which is hardly impressive for a #8 hitter, much less a lead-off hitter. However, he does have speed, which is clearly the attribute that Dusty feels is most valuable in a leadoff hitter.

It seems very odd that you'd want someone who makes outs so frequently to get the most plate appearances of anyone on the roster, but that's what Dusty would have happen if Patterson joins the Reds.

Sadly, all Reds fans can do is shake their head at Dusty just being Dusty. 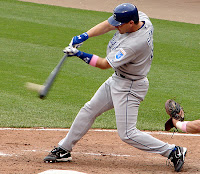 Unfortunately, Dusty's interest in Lofton and Patterson as centerfielder/leadoff hitter wasn't the only dark cloud on the horizon. Dusty followed it up by expressing an interest in carrying a third catcher. The Reds went down that road last year with Chad Moeller with poor results, but it seems Dusty has interest in a encore performance. Evidently Dusty hasn't studied his history, so regrettably the Reds may be deemed to repeat it.

Three catchers? It's an issue that can muddy any Spring Training debate about the makeup of a final 25-man roster.

The Reds already have two returning catchers in David Ross and Javier Valentin. But on Feb. 1, veteran Paul Bako, a non-roster invite, was signed to a Minor League deal. From 2003-04, Bako played for Reds manager Dusty Baker.

Baker said it's possible the Reds could carry three catchers.

"It depends on how things go," Baker said. "Late in the game, you'd love to have a guy like Bako behind the plate for a double switch or to pinch-hit. I told [general manager] Wayne [Krivsky] I'm looking for options. The more options I have, the more things you can do, the more people that can play and be put positions where they feel comfortable and succeed."

Dusty is again bringing in "his guys," but the Reds cannot afford to carry a third catcher. On his career, Bako has a line of .233/.306/.315/.621 in 2,003 plate appearances. Dusty talks about wanting "options," but again it's hard to fathom how a competent baseball man could see any positive options that would be brought to the table by Paul Bako.

I'm not sure if Dusty has an illogical appreciation for Paul Bako or if he wants to have a third catcher to free up Javier Valentin for late game pinch hitting, but regardless the Reds simply aren't good enough be able to get away with wasting a roster spot on a player who brings zero production to the table. The Reds need to wring every last drop of production out of each roster spot, not take the field with essentially a 24 man roster.

Unfortunately, the season hasn't even started yet and Dusty is already returning to his wayward ways. Spring training is barely underway, but Dusty has already evidenced his absurd tendency to favor "his guys" over younger guys and an utter lack of understanding of the importance of on base percentage.

Thankfully, pitchers and catchers have just reported, so it's still too early for Dusty to have overworked any of our young pitchers, but it's fair to wonder if that can be far behind. Some may say that it's only talk, but it's talk that is indicative of belief. And, sadly, it's incomprehensible that a professional baseball man can entertain such ideas and consider them to be truly worthy of consideration.

At this point, it looks like Dusty is going to just keep on being Dusty, which is bad news for the Reds.
Posted by Lark11 at 9:08 PM