As per usual, the Reds will have a crowded outfield in 2008. It's been the case for years and will continue to be the case next year. After next season, it is entirely possible that both Adam Dunn and Ken Griffey Jr. will be gone. Until that time, it's still a bit of a logjam, but it appears that the centerfield race is coming to an end, so it's time to take a look at what we have for 2008. 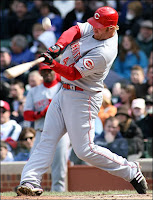 Dunn continues to be a lightening rod for discussion. I'm not sure there is a more polarizing figure in the majors today. The crown formerly belonged to Barry Bonds, but his forced exile has made Dunn the likely successor.

I suppose the reason for it is that Dunn, more than any contemporary player, straddles the divide between traditional scouting and statistical analysis. To watch him play is to see an awkward fielder with a poor arm and an inability to make consistent contact. To look at his stats is to see a massively productive player who combines power and patience like few other players. So, in essence, your view on Dunn depends on your larger view of baseball.

One thing I've been watching is the possibility of an early decline from Dunn due to a reliance on "old player skills." Bill James first suggested the idea that young players whose value is driven by power and patience will likely decline earlier, as they are less equipped to deal with a slowing bat or the loss of a step. A player with a myriad of skills or with a surfeit of speed can better deal with aging. In short, Rickey Henderson can afford to lose a step, but Adam Dunn cannot. Ichiro can afford a slightly slower bat, but Adam Dunn cannot.

Dunn has yet to demonstrate any sort of decline, but if he does slip a notch then he could decline in a hurry. While he has been and continues to be very productive, I wouldn't be in favor of giving him a long term deal, as he seems the type whose production could fall off the table in a hurry.

For 2008, it seems like more of the same, though the Bill James projection is much more optimistic than ZIPS. The Reds will have a difficult decision to make after the season on Dunn and his production next season will go a long way towards helping them decide. 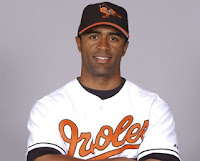 At this point, it seems like C-Pat is a "stone cold, lead pipe" lock to be the opening day centerfielder. How the hell did that happen? Honestly, I'm not sure, but evidently Dusty works in mysterious ways. Jay Bruce is on the verge of following Chris Dickerson to the minors, while Freel and Hopper have been marginalized as viable everyday players. Given the way events have unfolded, I'd actually be surprised if C-Pat isn't the starting centerfielder.

On the positive side, Patterson can run and play solid defense. On the flip side, he probably brings the worst everyday player on base percentage in the majors to the table. He also makes inconsistent contact and doesn't bring much power to the table. All in all, he's a Dusty guy and the best that can be hoped for is that Dusty doesn't use him as the leadoff hitter.

Unfortunately, there's really no more appropriate way to kick off the Dusty Baker era than having Corey Patterson get the first AB of the year.

There isn't much left to be said on Ken Griffey Jr. He's one of the best players to ever pull on a pair of spikes. Unfortunately, his time in Cincinnati just never worked like it was supposed to work, which is a remarkable statement given how well things started.

The Reds made a winning trade to acquire him and signed him to a below market contract rate. Given that, how could it NOT have worked out? It's almost inconceivable, but it's been something just short of a disaster since he arrived. At this point, the fairytale is very unlikely to end happily ever after.

Even if Griffey manages to avoid the injury bug that has plagued him, his level of production has fallen off. He can still be a very productive player, but he's not the game changer that he once was. Personally, I think Griffey Jr. has gotten more than his share of unfair criticism during his time in Cincy, but maybe he can lead us to the postseason in 2008 and change the baseball climate in Cincinnati. That wouldn't be such a bad legacy for Jr. 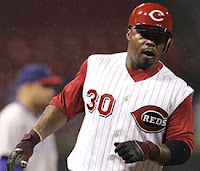 While I'm not as high on Hopper as some, he has begun to grow on me. In fact, I'm intrigued by his ability to get on base while rarely hitting the ball out of the infield. It's a unique skill, but one that might actually be sustainable. At the very least, I would prefer to see him get the opportunity, but guys like Hopper have to fight for every last ounce of respect. One would think that Hopper deserved first crack at the starting centerfield job based on his performance in 2007, but, unfortunately, Dusty didn't see it that way.

For some players, shaking the label of "bench player" is one of the most difficult things to do. This may have been Hopper's best chance to lay claim to the title of "everyday player" at the major league level, but it's a chance that seems to have slipped through his fingers. At the very least, he's a backup who can handle all three outfield positions and do an admirable job of setting the table.
Posted by Lark11 at 8:47 PM