Well, it was a banner day for the Reds renewed international scouting efforts, as the Reds reaped the rewards of having competent scouts and an owner willing to spend money on international free agents. 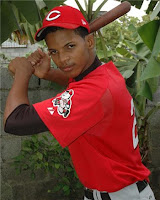 The Reds today signed 16-year old Juan Duran out of the Dominican Republic. While most organizations didn't think that Duran was eligible to be signed until July 2, the Reds uncovered that under the rules they could sign him now. Even Duran's agents were under the impression that he had to wait until the start of the international free agent signing period (July 2 to August 31), but the Reds were correct and as a result they have brought Duran into the organization.

Duran is only 16 years old, but he already stands 6"6' tall and weighs 190 lbs. He bats right, throws right, and has almost unlimited power. Some scouts already have his power at 80 on the 20-80 scouting scale.

Here is what the Reds had to say about Juan Duran:

Buckley and Arias were both with the Blue Jays when the team drafted outfielder Alex Rios as an 18-year-old with the 19th overall pick in the 1999 draft.

"He compares favorably, only he's bigger and stronger at this age than Rios was," Buckley said. "He's more physical, and he has shown some of the same feel for hitting that Alex displayed.

"His body and offensive ability stick out like a sore thumb," Arias said. "In batting practice, he was just hitting them over the trees in our complex, hitting them out to center and right-center field. You can tell just tell from the way the ball jumps off his bat.

"I've never seen a 16-year-old with this type of ability. I talked to some people in the Dominican Republic who crossed paths with Vladimir Guerrero at that age, guys who have been scouting in the Dominican for more than 20 years, and they said they've never come into contact with a bat like this. He's got 80 power potential (on the 20-80 scouting scale) and just gets tremendous loft. In my opinion, in terms of his bat and his body, he's a better overall package than Angel Villalona. We wanted to change the perception in the baseball industry that Cincinnati is a cheap organization. We want to get back to being the Big Red Machine."

And, here is what other organizations had to say:

Another AL international scouting director said his team was also interested in Duran.

"We liked him," another AL international scouting director said. "We saw him as a corner outfielder, big, long-limbed, real bat potential. He's definitely a guy a lot of people liked."

One National League international scouting director compared Duran's body to that of a young Juan Gonzalez.

"He might end up being in center field because he's a plus runner. It's all going to come down to how big he gets and if he slows down," the scout said. "He's going to put on some weight, so whether he retains that speed will tell if he ends up at a corner.

"He's got some bat speed, and the power will come from the bat speed, but it all comes down to how thick he grows."

One AL international scouting director called him "one of those guys who don't come around very often."


"He's got all the tools," he said. "He's a pretty good player, very advanced for his age. I think it was a good investment. He's a good athlete, he has above-average power right now and he has a chance for 80 power (on the 20-80 scouting scale). He demonstrated every ability that you like to see in a kid. He's a very outgoing kid, good swing. There's no doubt about his approach, bat speed and power . . . he has all the common denominators you like to see, good balance, rhythm and a pretty good idea of what to do at the plate.

"If he has to go to a corner (outfield position), he certainly has the power to go there. But right now I'd give him every opportunity to play center field because he's light on his feet and has a good idea how to play out there. He's probably 6-foot-6, 195 pounds, somewhere in that area, so he could gain a whole 40 pounds with no problem. You look at this guy, and you hate to compare guys to major league players, especially at his age, but he could be a young Dave Winfield in the making."

Obviously he's young, but he seems to be an impact prospect at least equivalent to Drew Stubbs and Devin Mesoraco. So, once the big four prospects graduate from the Reds system, Duran may help form the next wave of top tier talent. In fact, he could conceivably be our #1 prospect in the near future. Given his age, he's clearly got a lot of developing to do, but the Giants signed Angel Villalona as a 16-year old out of the Dominican Republic and Baseball America just rated the now 17-year old as the team's #1 prospect.

Unfortunately, the Reds forfeited their 2nd round pick in the 2008 draft because they signed Francisco Cordero. It would have been their 1st round pick, but since they select in the first 15 picks, that draft pick is protected. However, this signing helps offset the lack of a second round pick. In fact, given Duran's skill-set, the Reds essentially added another 1st round pick to the farm system.

This is exactly how the Reds need to operate in order to be competitive at the Major League Level. It's important to draft well, but it is also vital to supplement that talent with international prospects. If you can acquire two impact prospects in the draft and two via international free agency each year, then the farm system will always be in good shape. It's not enough to just draft well any more, as the best farm systems have a blend of prospects acquired from the draft and those signed internationally.

All in all, it's hard not to feel great about the Reds organization on a day like this. It's just another example of the Reds renewed emphasis on player development, which should help make the Reds a successful MLB team for a sustained period of time.
Posted by Lark11 at 2:03 PM