This is perhaps the most important aspect of the Reds team heading into 2008. The bullpen has almost single-handedly unraveled the last two seasons for the Reds.

Not to mention, it seems like whenever the Reds are good, it's due in large part to a very strong bullpen. Whether it was the Nasty Boys in 1990 or the more recent vintages featuring Scott Williamson, Danny Graves, Stan Belinda, and the absurdly underrated Scott Sullivan.

Krivsky made a big splash this offseason by signing Francisco "Coco" Cordero to a very large multiyear contract. Given how few innings relievers work, it is a questionable way to spend such a large portion of your payroll. However, given how ineffective the bullpen has been and how that has demoralized the team, the move is understandable, even if not entirely defensible.

Now that the makeup of the bullpen has finally been settled, we can take a look at what to expect in 2008.

Francisco "Coco" Cordero was easily the best closer available on the market and Krivsky wasted no time in locking him up, as he moved quickly and decisively to address the problem. In addition, the Reds weakened the Brewers by signing away their closer.

Cordero was truly dominant last year, but time will tell if he can be that dominant again in 2008. It is clear that 2007 was the best year of Cordero's career, so it'll be interesting if he can continue to perform at that level. A complete dropoff seems unlikely, as Cordero has had good season before, so he should at least be solid.

Coco is strictly a two pitch pitcher. He throws a high velocity fastball and a nasty slider. Last year, his fastball averaged out at 96.1 MPH and his slider averaged 88.8 MPH. Coco threw the fastball 50.4% of the time and the slider 49.6% of the time.

Cordero's high strikeout/low contact rate style is the ideal fit for the Reds, who play in a homer friendly park with a porous defense. If Cordero can dominate the 9th, then Weathers and Burton will be left to handle the 8th and 7th innings respectively. The Cordero signing bumps everyone else down a role, so it could have a significant trickle down effect on the 2008 bullpen.

Overall, the Coco signing addressed a huge need and may go a long way towards addressing the team's biggest weakness of the past few years. 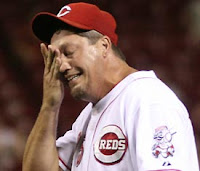 I don't foresee Weathers losing any effectiveness because he's moved up from the 9th inning to the 8th inning, but maybe this is the year his age catches up with him. Then again, maybe not. I don't know how Weathers continues to be so effective, but he certainly does.

For the Reds sake, 2008 had better not be the year that he loses it. 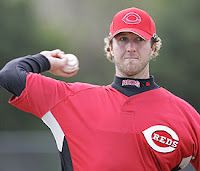 It really is a tale of two halves with Burton. In the first half, he struggled just like you'd expect from a Rule V draftee. However, in the second half, Burton really exploded onto the scene.

In the first half, Burton pitched only 8.2 innings and posting a 5.19 ERA with a 9/7 K/BB ratio. The Reds took advantage of every opportunity to put him on the DL and get in some "rehab" work in the minors. When Burton got back after the All Star break, he was a different pitcher. He posted a 1.83 ERA in 34.1 innings with a 27/15 K/BB ratio. He was dominating and really helped solidify the Reds bullpen.

On an even more positive note, some of the guys doing analysis of pitch data think Burton's fastball has such good velocity and movement that it's most accurate comparable is Mariano Rivera's cut fastball. Whether or not that's accurate, the fact that it is even being mentioned in the same sentence is a positive.

It'll be interesting to see which Burton we get in 2008. It's hard to imagine him being as successful as he was in 2007, so a small step backward is probable. However, if his control improves a tick, then he could be just that could, which would go a long way towards solidifying the Reds bullpen. There may not be a more improvement pitcher in the Reds bullpen this year. 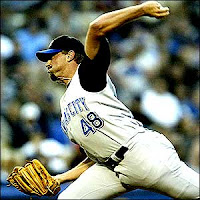 Jeremy Affeldt is an interesting pitcher. I've had my eye on him for quite sometime, because he has a tremendous arm. He could be a power lefty, which is a rare commodity in the game today. He's a got a very good fastball and a nasty, sharp breaking curveball. In addition, he gets a high percentage of groundballs. He's got everything he needs to be successful, but he just doesn't ever command it well enough to be actually be successful.

Obviously, the Bill James projection is based on Affeldt being a starter, so maybe he would fare better if he were programmed to be a reliever. Regardless, the Reds need Affeldt to be successful in 2008 for his production, but also because a good season would likely increase his Elias ranking and net the Reds a compensatory draft pick after the season.

As it stands, Affeldt always seems like a pot about to boil over. He managed to keep a lid on it last year long enough to have decent success, but there's no guarantee that he won't just boil over in 2008. In fact, pitching in front of the Reds defense may be just detrimental enough to ensure that Affeldt cannot be successful in 2008, as his margin for error is non-existent.

Affeldt could be a bust in Cincy or he could finally put it altogether and become a dominant force in 2008. If I had to bet, I'd lay money on the former over the latter, but crazier things have happened. 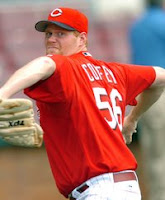 Todd Coffey is baffling. He really is. He's one of those guys who SHOULD be better than he is. One of those guys who has a good strikeout rate, good walk rate, and good GB/FB ratio. He's got all the harbingers of success, but never gets the success itself. There are a select few others in this category, including Dave Bush, Jeremy Bonderman, and arguably Matt Belise. However, none of them ever quite live up to what we think they should.

This offseason, Coffey lost a significant amount of weight. Last year, he was pitching at 264 lbs, but at last weigh-in was at 248 and shooting for 240.

When year in and year out you struggle, ANY change is cause of optimism. You don't want every thing to keep staying the same, as they likely wouldn't lead to new results. However, Coffey's weight loss gives us a reason to hope that 2008 will be the year that he finally puts it altogether. The year his heavy fastball and even heavier GB/FB tendencies pays off huge for the Reds.

The Reds desperately need someone to step up and be the 4th quality reliever in the bullpen. It would be great if it were Todd Coffey, as he should be exactly the type of pitcher the Reds need. Whether it'll happen remains to be seen, but maybe a more fit Coffey is a more effective Coffey. 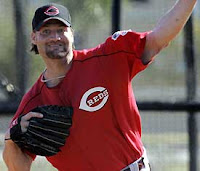 Mercker was out of baseball in 2007 due to a brain aneurysm and his recovery is just a great story. However, this leaves us with no projections for him, but perhaps the most important number on Mercker is 40, which is his age.

At this point, I guess we have to consider Mercker to be a lefty specialist, though his performance against lefties over his career isn't all that much different than against righties (OPS vs. L: .712, OPS vs. R: .770).

It's interesting that the Reds chose to keep Mercker over Mike Stanton. If the Reds looked at Stanton this spring training and saw no sign of him turning things around, then I applaud the decision to eat his salary. It's not beyond the realm of possibilities that it was his IPED use that made him effective in the recent past and it certainly didn't help his image in Cincy, so maybe we should be thanking George Mitchell. However, it seems odd that the Reds would decide to cut him loose and then replace him with a lefty who is no better bet for success.

Am I mistaken, or is Mercker a very comparable player to Stanton? Both left-handed relievers who are at the very tail end of their careers. Each a bit of a long shot bet for success in 2008. So, if you have the same player, but one makes $3M and the other the veteran minimum, then wouldn't you want to roll the dice that the $3M man will bounce back enough to enable you to not have to eat the entire contract?

I'm glad Stanton is gone, but I just wonder about dumping him without having an appreciable upgrade ready to take his spot. 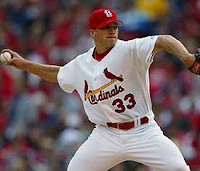 This one is a true head scratcher. Mike Lincoln has never been a consistently effective reliever, so I'm really not sure what he's doing in our bullpen. I'm not going to spend much time on Mr. Lincoln, because I don't think he's going to be around very long. He seems like a likely bet to be replaced by Josh Roenicke, Pedro Viola, or Matt Belisle in the near future.

Lincoln had Tommy John surgery in July of 2004 and an additional surgery for an elbow debridement in 2005. So, on the positive side, maybe he's just now recovered enough to be a positive member of the bullpen. However, his career 5.4 K/9 and 3.3 BB/9 don't exactly instill a lot of hope.

The most pertinent fact about Lincoln's presence in the bullpen may well be that it is a sign that our bullpen isn't as good as we hoped it might be. In fact, at this point, I have to question how improved it really is over the 2007 version.

This is our new and improved bullpen? Is it even any better? I suppose we could conceivably have 3 quality relievers instead of just 2, but it's still very clear that this bunch will walk too many and struggle too much to be a top bullpen. We've got some live arms in the bullpen (i.e. Affeldt, Coffey), but I'm just not sure the pitchers to whom they are attached have any idea what to do with them.

Maybe Burton will continue to dominate like he did in the 2nd half, Coffey will take a step forward, Affeldt will continue to successful walk his fine line between effectiveness and train wreck, and Mercker will find the fountain of youth. But, in the end, there just seems like too much risk and too many "ifs" at work here.

As it is currently configured, I'm really not sure this bullpen is playoff caliber, so hopefully Josh Roenicke and Pedro Viola can come up and make it 5 deep, instead of just 3. If not, this could be another long year in the Cincy pen.
Posted by Lark11 at 11:56 AM