Back up the Truck...Bruce should be returned to Triple-A

Well, sadly, it's time for Jay Bruce to return to the minors. His play has been inspired and his exuberance appreciated, but in the end the Reds still need to return him to the minors. As good as Bruce has been, he's still been outdone by Johnny Cueto. Unfortunately, there's only room for one of the two on the team right now and it has to be Johnny Cueto.

Under the MLB rules, a team controls the rights to its players for the first six years of his career. The first three of which are years where the team can dictate the player's salary and the final three of which involves salary arbitration to determine player compensation. After six years, the cost control is gone and the free agent market awaits.

If the Reds were to keep both Jay Bruce and Johnny Cueto on the MLB roster coming out of spring training, then it is very likely that Homer Bailey, Joey Votto, Jay Bruce, and Johnny Cueto all will be eligible for free agency after the 2013 season. In 2007, Homer and Joey played enough to earn, respectively, 0.041 and 0.027 years of service time. So, just like Cueto and Bruce, they would need to be at the MLB level for the next 6 full seasons to earn enough service time to hit free agency. While it's fantastic to have all this impact rookie talent in the mix, the Reds need to manage it in order to get maximum value. It would be foolish for the Reds to put their four top prospects on the same service time schedule, as it would reduce the opportunity to retain all or even the most of them. 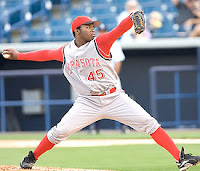 As it stands, it's unfortunate enough that the Reds will likely have three top prospects on the same schedule, but adding the top prospect in baseball to that mix would be foolhardy. By keeping Jay Bruce in the minors for a few months of 2008, the Reds would ensure he gets a bit more time to polish his game and delay the start of his service time clock. If they did so, they could bring him up mid-season and delay his impending free agency until after the 2014 season.

The Reds have done a great job of drafting and developing talent, but they

need to ensure that they get the most out of it. Given that the Reds aren't likely going to be able to send Votto and Bailey down long enough to delay their free agency date, it comes down to a choice between Bruce and Cueto. As good as Bruce has been, Cueto has been better. Cueto is the talk of the Grapefruit League and he needs to be in the Reds rotation when they break camp. Unfortunately, that means that they'd be better off putting Bruce in the minors to start the year.
Posted by Lark11 at 9:53 AM