The Reds topped the Pirates 12-11 on Saturday, illustrating that as to be expected, the hitters are ahead of the pitchers. Anyway, here are some early thoughts on the Reds spring training happenings.

1) The Alex Gonzalez injury means that the Reds are likely to need another shortstop to start early in the season. One would think that Jeff Keppinger would be the easy, logical choice. However, today's starting shortstop brings a shudder down the spine. Instead of anointing Keppinger the starter and letting him play at short, Dusty instead gave Juan Castro the start and Adam Rosales the mop up duty. It seems very odd that Keppinger only played first base, especially since Adam Rosales is very unlikely to be a shortstop at the MLB level.

2) Jay Bruce continues to what he has always done. Crush the 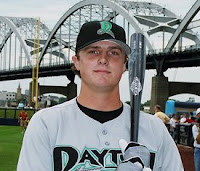 baseball. The level of competition doesn't seem to matter, as Jay Bruce can rip them all. He could roll out of bed in the dead of winter and hit. And, Reds fans, he's ours for years to come.

3) Ken Griffey Jr. and Adam Dunn each hit their first homerun of the spring off of Zach Duke. Duke set the world on fire in his rookie year, but now serves as little more than an important example of pitchers needing to strikeout more than 5.0 per nine innings to be effective. At this point, his low strikeout rates seem likely to doom his career.

4) Josh Roenicke could steal a spot in the bullpen with a stellar spring. My gut tells me that he needs more polish, but performances like today could push him to the MLB level. He pitched one inning, allowing no base runners and striking out 2. 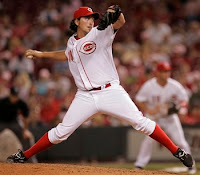 nothing but ruin the careers of just about everyone involved. Kearns and Lopez have been disappointments in Washington and Billy Bray and Gary Majewski have been disasters for the Reds. Bray can't get healthy and Majewski has been a gas can in Cincy organization. I have high hopes for Bray, but he needs to get healthy in a hurry. At this point, Majewski with his 40.50 spring training ERA is on the verge of becoming irrelevant.

6) It is nice to see Rosales moving back up the defensive spectrum, as that can only increase his value. His bat isn't going to be enough to handle firstbase, but if he can play a more challenging defensive position, then his prospect value increases. 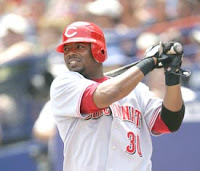 Bruce heads back to the minors, it is good to see the Reds giving Chris Dickerson a look. He is one of the best athletes in the system, but a lack of consistent contact has plagued his development. However, he can certainly be of use if he can increase his contact rate.
Posted by Lark11 at 2:30 PM