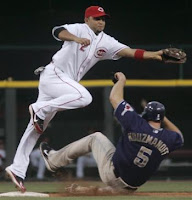 Interesting news out of Reds camp yesterday. Alex Gonzalez had been sitting out early this spring training with a bruised knee, but additional tests have now determined that he is actually suffering from a compression fracture of the left knee.

What's truly strange about it is that Alex Gonzalez didn't start a single game after September 12th last year because of a bone bruise in the same knee. Now, I haven't heard any definitive word, but I think there is a good chance that he wasn't suffering from a bone bruise at the end of last year, but rather the more serious injury that was recently diagnosed.

It may well be time for the Reds to get serious about the medical care that is provided throughout the system. In the modern game, teams like the A's, Red Sox, and Padres have taken to maximizing the efficiency in all their baseball operations. They look at every aspect of their operations and determine the best way to maximize the effectiveness of that department.

Their efforts have extended to injuries, which can really reduce the efficiency of production obtained per dollar spent. If you can reduce injuries, then you'll get more for your money, which is key to the success of every organization. The A's have had good success using what they call a "pre-hab" program, which was implemented under former pitching coach Rick Petersen. It involves a workout and throwing regimen that is specifically designed to target the muscles used in the pitching motion, which helps reduce injuries to a pitcher's arm.

This detailed and effective program is seemingly in direct contrast to how the Reds operate. I remember an incident a few years ago that I still haven't heard explained. Aaron Boone was dealing with a "sprained knee" and missed some time, but eventually made his way back onto the field. He lasted about three innings before his knee buckled and he had to leave the game. After the game, it was revealed that Boone had a torn ACL in his knee. Given the limited amount of time that he was on the field, it seems likely that he was dealing with a torn ACL the entire time and that it was misdiagnosed by the Reds medical staff. If that is truly the case, then it is difficult to understand how they could have overlooked such a commonplace sports injury.

When you add in the struggles the Reds have had with injuries to their pitching prospects (Ty Howington, Chris Gruler, Richie Gardner, etc), Ken Griffey Jr.'s injury struggles, and the possible incorrect diagnosis of Alex Gonzalez's knee injury and it becomes difficult not to question the manner in which the Reds run their training and medical staff.

Given the amount of money being invested in baseball players, the value of keeping them healthy continues to skyrocket. A $10M player isn't worth much if he can't stay on the field, so it may be time for the Reds to re-evaulate and possible overhaul the way they prevent, diagnose, and treat injuries. As a mid-market team, it's important to get the most production per dollar spent and if the Reds aren't keeping their players on the field, then they aren't getting enough value per dollar to be competitive. I'm not a medical professional, but it hardly seems like the Reds are doing enough to keep their players healthy and productive.
Posted by Lark11 at 11:01 AM