Well, with the MLB season just around the corner and the roster starting to take shape, it's time to take a look at what we can expect out of the Reds in 2008. To aid this little endeavor, I've included the stats for 2007 and two sets of 2008 projections for each player, including a Bill James projection and the well established ZIPS projection. 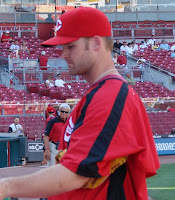 After a breakout out 2006 season, the Reds made Ross their full time starter only to see him regress significantly to the mean. While the regression certainly should have been expected, that doesn't necessarily mean that it was. I'd be curious to know what the Reds expected to get out of Ross in 2007.

By now, it should be obvious to everyone that 2006 was the exception, not the rule on Ross. However, Ross could still be an effective player for the Reds in 2008. In fact, the Bill James projection would make him a very effective player in 2008.

Overall, Ross should be a bit better 2008 season, falling somewhere in between his strong 2006 and poor 2007. The power is legitimate and the batting average should rebound to the .225-.230 range. While he'll never be confused with Johnny Bench, if Ross can hit .230, then his power and solid defense should prevent him from being a complete liability behind the dish. 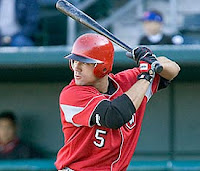 Joey Votto has been one of the Reds top prospects for the past couple of years and finally got his opportunity to play at the end of 2007. In his brief cup of coffee, Votto provided a tantalizing glimpse of the future and justified the faith of the Reds nation.

The Reds need to just "set it and forget it" when it comes to Joey. Plug him into the lineup and let him do his thing. If they do that, then they'll like the results. 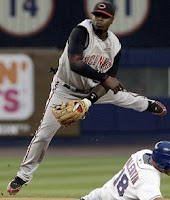 Phillips undeniably had a very strong year in 2007, but often times big steps forward are followed up by small steps backwards. It would seem that projections are adhering to this maxim. At the very least, I would really expect Phillips' on base percentage to fall below .330 in 2008. He doesn't have good on base skills and benefited from 12 HBP in 2007, which pushed his OBP up over .330. Unless Phillips can better his .288 batting average, he seems likely to post a very low on base percentage in 2008.

Overall, I tend to agree with these projections. Phillips does many things very well, but a step backward seems much more likely than a step forward. It would also seem unlikely that he'll repeat his 30/30 season, which was largely a function of his high number of ABs and his low number of walks.

Phillips should be very solid in 2008, but a step backward shouldn't be unexpected. 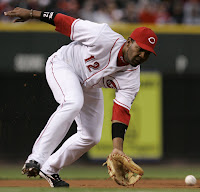 For me, the presumption has flipped on both Matt Belisle and Edwin Encarnacion. For each, I waited two or three years for them to put up the kind of numbers that were expected. However, at this point, I no longer expect the breakout year to arrive, but rather just another mediocre one. I'll no longer play Charlie Brown to the Lucy of Belisle and Edwin, so 2008 will not see me taking yet another big swing at the football. For now, I'll expect the worst and wait for them to prove me wrong. 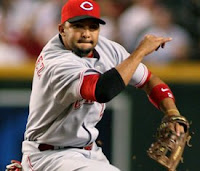 Alex Gonzalez was a big surprise in 2007, as he exceeded all realistic expectations and yet fans still weren't satisfied. A-Gon was stellar at the plate, posting his best career offensive season. In addition, his defense was quite solid, plagued only by a few more errors than usual. However, he displayed good range and turned the double play very well.

All in all, Reds fans should be very pleased if A-Gon replicates his 2007 season. However, he is likely to regress to the mean a bit, as his bat just isn't as good as it was in 2007. Given that Reds fans weren't satisfied by A-Gon's career year and that he's unlikely to match that production in 2008, expect the calls for Keppinger to be frequent.

Keppinger was a true surprise in 2007. Last offseason, Krivsky made a series of moves that seemed very odd and illogical at the time, but ultimately netted the Reds Jeff Keppinger. Keppinger seems like he could just roll out of bed and hit .300. His bat control and ability to make consistent contact are truly first rate.

In 2007, Keppinger had more walks (24) than strikeouts (12). In 241 ABs, Keppinger struck out only 12 times! His Contact % was 93%, which is better than Ichiro. While his lack of secondary skills does temper his value a bit (in fact, Keith Law argued that he was one of the most overrated players in baseball last year), he's a nice player for an all or nothing Reds offense.

Batting average is driven largely by putting the ball in play, as a ball cannot find a hole if it is in the catcher's mitt. Strikeout kings like Adam Dunn and Richie Sexson aren't going to be able to post high batting averages. However, Keppinger is a player who will consistently put the ball in play and will have a high average as a result. He brings a new dimension to the Reds lineup which at times can be too one dimensional.

It'll be interesting to see how the Reds get his bat into the lineup, as Baker doesn't have faith in Keppinger's ability to handle shortstop over the long run. Accordingly, he seems destined to be a utility player and spot starter. He hasn't been with the Reds long, but he's been there long enough to become a fan favorite.
Posted by Lark11 at 11:53 AM