Well, the picture is becoming much clearer. It seems fairly obvious that the Reds rotation is set and somewhat surprisingly it won't include Homer Bailey, but will include Johnny Cueto.

The rotation has a stud #1 starter, a solid veteran, two rookies with lightening in their arms, and one veteran filler. It's an interesting combination, but there are still 3 question marks. It'll be interesting to see how it all plays out, but it's impossible to know what we can reasonably expect out of Cueto and Volquez and it's impossible to like what we can reasonably expect from Josh Fogg.

What more can really be said about Harang?

He's a stud, plain and simple. He combines a high level of performance with a heavy workload, so the sheer volume of quality innings he provides is of inestimable value for the Reds. The Reds weak rotation and poor bullpen of years past would each be exponentially worse without Harang.
It's remarkable to think that the Reds got him from the A's in the deal for Jose Guillen.

Harang is the most important player to the present and future of the organization. If you really want to give yourself nightmares, imagine where the Reds would be if Harang were to get injured (knock on wood). There is a lot of optimism over the Reds, but one injury to Harang and they are back in the dark ages. He's that important.

Given how consistent he is, it's no surprise that both Bill James and ZIPS expect more of the same from Harang, which is music to the ears of Reds fans. 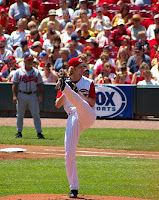 Arroyo is a key pitcher in the Reds rotation. Ideally, in 2008 he'll prove that he is closer to the 2006 version than the 2007 version. If the Reds are going to make a serious push this year, then they need Arroyo to be good. The Reds already have 3 question marks in the rotation, so both Harang and Arroyo need to deliver.

If Arroyo can pitch at his 2006 level, then Harang and Arroyo combined will provide 400+ innings of top notch pitching production. Unfortunately, I don't have faith in Arroyo like I do with Harang. That said, I'd be happy if he could match the Bill James projection. By this time next year, Arroyo will likely be pushed back to the #3 or even #4 spot in the rotation.

I'm hoping for a nice bounce back season, but expecting Arroyo to be our 3rd best starter behind Harang and Cueto. 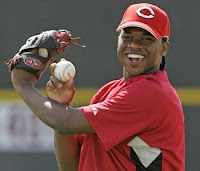 Cueto was truly astonishing in 2007. He was dominant at 3 separate levels of the minor leagues. The competition level kept increasing, but it didn't matter as Johnny just kept mowing them down. Spring training this year was just more of the same, second verse, same as the first. Johnny just continued to get it done.

The very fact that he is going to open the year in the rotation speaks volumes. The Reds have an organizational culture that is unaccustomed to good young pitching, so Cueto had to be very good in Spring Training to overcome the team's hard earned mistrust of young pitchers.

Cueto has great stuff and good control, but his ability to carry over his success against MLB hitters will be determined by his command. His ability to hit his spots inside the strikezone has been called into question at times and MLB hitters don't often miss location mistakes. Overall, the future is supernova bright for Cueto and may mark the end of the Dark Ages of player development in Cincinnati. 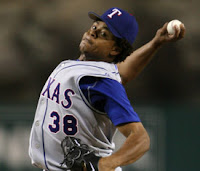 Volquez has certainly gotten off on the right foot in the Reds organization. His spring training has been almost as impressive as Cueto's and his strong K/BB ratio shows a nice blend of power and control. However, I still have questions as to whether he's succeeding on the back of the fastball/change-up combination. If he is, that may not be sustainable the second and third time around the league.

To be successful in the rotation, Edinson needs to have an effective breaking ball. He has to have a pitch that can change the eye level of hitters. He needs an offering that works in two planes. MLB hitters are simply too talented to be fooled by straight pitches time and again. If all they have to worry about is the speed of the pitch and not the break, then it's only a matter of time before they get the timing down.

Volquez has an electric fastball and an impressive changeup, but his success will still be driven by his breaking ball. If he can command his curveball, then he could be a very effective starting pitcher. If not, then he's likely headed for a career in the bullpen. It'll be interesting to see if Edinson can carry his Spring Training success into the regular season.

Josh Fogg is Josh Fogg. His strikeout rate is too low, his walk rate is too high, and he won't get the benefit of the elite Colorado Rockie defense. I hope I'm wrong, but this has the look of a "Miltonian" disaster.

Too many baserunners via the walk, too much contact from the low strikeout rates, and too little range from the defense. It all adds up to a lot of baserunners allowed and a lot of runs allowed.

Unfortunately, it's hard to imagine the Reds having more than 3 quality starting pitchers in 2008. Cueto and Edinson will have their ups and downs, Fogg should be well below average, Arroyo will probably be a solid #3 starter, and Harang should be in the running for the Cy Young yet again.

Will that be enough for the Reds to make a big playoff push in 2008? I have my doubts, but time will tell.