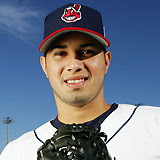 Some interesting and rather surprising news came out of Cleveland today. The Indians released 25 year old reliever Fernando Cabrera. Personally, I'm very surprised they cut him loose and even more surprised that no one traded for him.

Given the Reds struggles in the bullpen, picking up Cabrera as fast as possible would seem to be a no-brainer. Cabrera is a young reliever with a power arm, something which is in short supply in the Reds' bullpen. In 2007, Cabrera struck out 10.4 batters and walked 5.9 batters per nine innings. Clearly, he has a tremendous arm, but also some control problems. In his career, Cabrera has posted a 4.6 BB/9 and a 10.0 K/9.

Given his age and upside, this is clearly the type of player on whom the Reds should roll the dice. If he improves his control only a tick or two, then he would likely be a tremendous asset in the bullpen. Not to mention, a switch to the NL should only help, as he would not have to face the DH.

Here's what the 2006 Baseball America Prospect Handbook had to say about Fernando Cabrera:

"The Indians had a poor draft in 1999, as their top pick never made it out of Rookie ball and just one player signed in the first 20 rounds made it past Double-A. That exception is Cabrera, who reached Double-A as a starter but has been groomed as a late-inning reliever since mid-2003. He has been impressive in late-season callups the last two years. Cabrera operates with two plus pitches, a lively 92-96 MPH fastball and a hard, diving splitter. His fastball command has improved since his days as a starter, and he pitches effectively to both sides of the plate. He has both the stuff and the demeanor to close. Cabrera's slider and changeup aren't nearly as effective as his other two offerings. When he stays on top of his slider and doesn't slow down his arm speed with his changeup, both pitches grade out as major league average. He rarely concerns himself with holding runners close to first base.There's no question that Cabrera is Cleveland's closer of the future. The Indians will ease him into the role, however, after re-signing all-star Bob Wickman to finish games in 2006. Cabrera will help set up Wickman this season."

Given the low cost and the substantial upside, it would seem to be exactly the kind of move at which Krivsky excels. Cabrera would be a great risk/reward acquisition. And, if he works out even half as well as the last undervalued player we grabbed from the Indians, then Cabrera would be a huge asset to the bullpen in 2008.
Posted by Lark11 at 10:31 AM