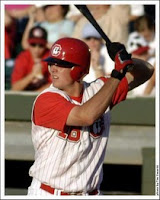 Well, so far, Jorge Cantu's performance is lending a lot credence to the idea that he just needed a change of scenery. At AAA Louisville thus far, Cantu is hitting .317/.364/.463/.827 in 41 ABs.
Whether or not he becomes a quality regular, it is hard to view the deal to acquire him as anything other than a win for the Reds. They gave up little of value to get him and Cantu should, at the very least, be a quality bat off the bench.

Chris Dickerson is an interesting prospect. He has great tools and strong on base skills, but he just isn't putting the bat on the ball often enough to be quality regular. At AAA Louisville, Dickerson is hitting .269/.371/.427/.798 with 19 steals in 24 tries. Dickerson is also a tremendous defensive centerfielder and could be the leadoff option that Cincinnati has lacked over the passed several seasons. Of course, he'll need to reduce his strikeouts to raise his batting average in order for this to happen. Still, even though he's a long shot to do so, it's still a good idea to keep an eye on Dickerson, as he may still surprise and make an impact at the Major League level.

Finally, Jay Bruce continues to crush every pitcher at every level. He is truly one of the top prospects in all of baseball. He is 20 years old, but is crushing AAA level pitching. Right now, he is posting a line of .312/.379/.624/1.002 at Louisville. Despite his age and level of experience, it seems Bruce is pushing hard for a chance to start in the 2008 Cincinnati outfield, despite the fact that it would create another logjam of talent. Bruce is one of the rare prospects who does not need much development time due to his extraordinary abilities.

While the outlook remains bleak for the Reds at the Major League level, there is still hope to be found, especially in the farm system.
Posted by Lark11 at 9:27 AM