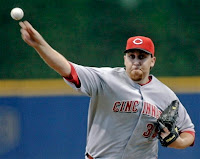 *** Through Thursday's games, the only team in the NL Central who has scored MORE runs than they have allowed is the Chicago Cubs (RS: 607, RA: 559). Even the mighty BrewCrew has faded to the point where they have allowed more than they've scored. The Comedy Central lives on.

*** The Reds have been playing great baseball as of late, it's just unfortunate that it took them so long to play up to their potential. They've always had the talent, but the bullpen never allowed the team to succeed.

*** Aaron Harang continues to amaze. After the Pirates took both games of the Tuesday doubleheader, Harang stepped forward and played the role of stopper to perfection. We haven't had a top flight pitcher like Harang on the Reds in a long time. If the Reds had a better team, then he'd be in the mix for Cy Young consideration. Jake Peavy is having an unbelievable season and should win the award in a walk, but Harang should at least be in the discussion. 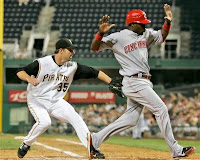 the season and ranks as one of the great acquisitions in baseball over the past decade. Hopefully, the Reds will keep him in Cincy for years to come.

*** Much like 2006, the bullpen this year has taken a big step forward after the All Star game. The emergence of Jared Burton and Billy Bray coupled with the continued excellence of David Weathers has given the Reds something resembling a solid bullpen. Bray and Burton have finally given the Reds a bridge from the starters to the 9th inning and David Weathers. Bray, Burton, Coutlangus, and Marcus McBeth could be the foundation of a rock solid bullpen in the future.

*** Interesting to see Bud Selig weighing in on the future Houston manager. In an interview, Selig threw his support behind interim manager Cecil Cooper and pointing to the importance of minority hiring in baseball. While I agree about the importance of bringing minorities into the ranks of MLB managers, it seems odd and inappropriate that the commissioner would express his preference before the hiring process has even gotten underway.

*** Another day, another loss for the ChiSox, another tirade from Ozzie Guillen. As much as I enjoyed watching him as a player, I can't imagine it would be much fun to play for Ozzie the manager. Here's a glimpse:

"I'm tired of seeing that [expletive], day in and day out. And I don't want to spend a miserable September seeing the same [expletive]. If I have to see the same [expletive], I told [team GM Kenny Williams], 'Bring somebody up. [Expletive] it.' If it's my fault, I should be moving out of here then. If it's my fault, [expletive] fire my ass and I'll be fine. I have the job to do, and I get paid a lot of [expletive] money to make this club work, but it's not easy to work with people like that. It's not easy.'' ''You see this since April,'' Guillen said. ''I keep giving people a chance to succeed. A pat on the back. I wish I played for a manager like that. I swear to God I wish I could have played for a [expletive] manager like that. Every time you fail and keep putting guys out there who fail day-in and day-out, that's easy to play."

Ozzie Guillien isn't the type of manager that seems likely to have a long tenure. That kind of volatility doesn't play well in a losing clubhouse. If the Sox don't turn things around soon, Ozzie might not be long for the job.

*** It's still very earlier, but despite the Reds recent resurgence they are still likely to have a high

draft pick. At this point, UCLA shortstop Brandon Crawford looks like the real deal. As of late, the Reds have been focusing on adding prospects who play premier defensive positions (Stubbs, Mesoraco). Crawford looks to have the complete, well-rounded game that would make him a fine addition to any team. Maybe the Reds will give him a look in next year's draft.

*** Homer Bailey continues to rehab at High A Sarasota, but the results haven't been great. At this point, the Reds might be better off leaving him in the minors and letting him start fresh next year.

*** Sad to see Bobby Livingston injured, as he was just beginning to establish himself in the big leagues. Livingston had to shut it down with a torn labrum of his left shoulder, which could be career threatening. His numbers had fallen off as of late, but he was interjecting himself into the picture for 2008. Livingston never survived on pure stuff, but rather guile and control. Whether that technique makes it easier or harder for Livingston to comeback remains to be seen, but I'll be pulling for him.

*** Early returns indicate that Wayne Krivsky may have found another diamond in the rough. In 15 ABs in Cincy, Jorge Cantu has posted a line of .400/.471/.667/1.137. While his glove may never enable him to be a full-time starter, the bargain basement price that Krivsky paid makes it acceptable for the Reds to use him in any role. Any production they get him out of him is pure profit. Krivsky strikes again!!!
Posted by Lark11 at 9:28 PM