All Undervalued Team: Kevin Frandsen, 2b

If I had written this prior to the 2007 season, I would have selected Kelly Johnson. I always liked Johnson's swing and approach at the plate, both of which he's demonstrating with aplomb this season. Now that Johnson has arrived, he's not really underrated any longer, so I'm turning my eyes West to the second baseman of the future for the San Francisco Giants, Kevin Frandsen.

Frandsen was a standout player at Bellarmine College Preparatory in San Jose and then moved on to excel at San Jose State University. At San Jose State, Frandsen posted the following lines:

While he will improve upon his stats, it's undeniable that Frandsen lacks tremendous power, great speed, and massive on base skills. That said, Frandsen compensates for what he lacks in tools with his makeup and baseball IQ, which are both off the charts. Frandsen also has the uncanny ability to put the ball in play. His tremendous bat control could make him an ideal #2 hitter in time.

Frandsen's bat control makes him the type of hitter that frequently brings about an early conclusion to his Plate Appearances. That kind of approach reduces both walks and strikeouts, as it is not possible to strikeout without seeing at least 3 pitches or walk without seeing at least 4. While his approach does limit strikeouts and (unfortunately) walks, but it also makes him a very good candidate to post a high batting average.

In 2007, Frandsen has walked in 7.5% and struck out in 8.9% of his plate appearances. He has also seen just 3.44 pitches per plate appearance and has made contact on 86% of his swings, all of which evidence his great contact skills and his "early consequence" approach at the plate. I'm not sure there is a better bet to be a consistent .290-.300 hitter around, as Frandsen has posted very high averages at every level of his playing career. It seems only a matter of time before he starts cranking out very high batting averages at the MLB level.

Recent statistical analysis has proven that there are more important measures than batting average, which has been largely overrated throughout baseball history. That said, the value of having a player who hits around .300 with tremendous bat control and a very high baseball IQ still cannot be overstated. Placido Polanco is proving just that for the Tigers in 2007. 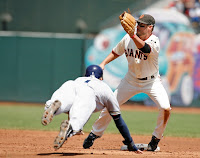 Frandsen should develop into a very good defensive second baseman and he's already the best defensive second baseman on the roster. The presence of Ray Durham on the roster has forced Frandsen to play numerous different positions in 2007 in order to get playing time. The Giants even moved Frandsen up the defensive spectrum by having him spell Omar Vizquel at shortstop. Frandsen may ultimately lack the range to play short, but he has acquitted himself admirably in 114 innings there this season. Still, Frandsen is likely to push Ray Durham to the bench or another position in 2008, as neither Durham's bat nor salary justify giving him playing time at the expense of Frandsen. Now that Bonds has gotten his tainted record, the Giants are likely to start the rebuilding process by turning to youth in 2008.

Frandsen was ranked the #6 prospect in the Giants system by Baseball America in their 2007 Prospect handbook, where they had this to say about him:

"Frandsen was one of the Giants' most heartwarming stories in 2006. He dedicated himself to making the big leagues to honer his brother D.J., who lost a lifelong battle with cancer in 2004. After he got there, pitching coach Dave Righetti, who was D.J.'s favorite player, quietly insisted that Kevin take his unform number 19, which he had worn since 1981. Frandsen has marvelous bat control and profiles as a solid number 2 hitter in the mold of Robby Thompson. He puts the bat in play consistently, uses the whole field and has occasional gap power. His baseball IQ is off the charts and he has plus makeup and maturity. Even when temperatures hit 112 degrees at Triple-A Fresno, he pestered the coaches for extra infield practice. Frandsen knows he must improve his on-base percentage and limit himself to pitches he can drive - a difficult task because he can put almost any pitch into play. He focuse on working couts in the Arizona Fall League and had success. While he also played shortstop and third base in Triple-A, his range and arm are merely adequate and limit him to second base. The Giants would like him to polish his bunting skills. By hitting .388 in the Arizona Fall League, Frandsen improved his chances of opening 2007 as San Francisco's second baseman. But, the Giants subsequently resigned Ray Durham, so Frandsen will apprentice in a utility role."

While he's unlikely to ever be a great fantasy baseball player or perennial All Star, but he's the type of player that you need to be successful in Major League Baseball. Frandsen is quickly becoming a fan favorite in San Francisco (as he was at Triple-A Fresno and probably throughout his baseball life), for his intelligence, hard work, and always leaving it all out on the field. The only thing Frandsen doesn't leave out on the field after a game is the dirt that covers his uniform.
Posted by Lark11 at 5:53 PM