Should the Reds Go Moose Hunting? 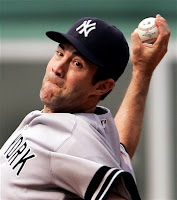 There's an interesting situation unraveling in the Bronx. Mike Mussina has been pulled from the rotation and elite prospect Ian Kennedy called up to take his turn in the rotation. The Yankees are saying that it could be a one start demotion only, but if Kennedy pitches well then it's difficult to imagine the Yankees pulling Kennedy and putting Mussina back in the rotation, especially with the success they have had with their other elite pitching prospect, Joba Chamberlain.

If the Yankees decide to stick with Kennedy, then there is a good chance that Mussina will be dealt, as he is not an option in the bullpen. In his entire MLB career, Mussina has never pitched even a single inning as a reliever. Given the Yankees potential desire to move Mussina and the Reds need for another quality starting pitcher, the situation begs the question of whether the Reds should attempt to acquire Mussina.

Given that the waiver trade deadline is approaching, it would seem to make sense for the Reds to attempt to acquire Mussina now. Given his lower level of performance in 2007 and his high salary, Mussina would likely clear waivers. That would enable him to be traded before the deadline on August 31.

The Yankee bullpen currently lacks lefthanded pitching. Given that, the Reds could try to trade

Mike Stanton to the Yankees for Mike Mussina. Mike Stanton also is likely to clear waivers, as his performance does not justify his salary. Also, Stanton has a long history of pitching for the Yankees, so he might prove to be an attractive option.

The Yankees would be able to shed payroll in the deal and possibly improve their bullpen, by adding an left-hander with substantial post-season experience to the team. Given that the Yankees are pushing for the playoffs, Stanton is someone who could improve their chances of reaching the post-season.

Maybe the Reds would have to add something else to the deal for it to make sense for the Yankees, but I think those should be the two principle players. Both teams subtract a player they don't need, improve their salary situation, and add a player who may be able to help them reach their respective goals.

Given that the structure of the deal makes some sense, the question then becomes, is Mike Mussina a good bet to bounce back in 2008?

Mussina's performance in 2007 has not been stellar, but how much of it has been his fault and is it indicative of a poor 2008?

Mussina has maintained his walk rate, groundball/flyball ratio, and his homerun rate. His ERA and WHIP have skyrocketed because his strikeout rate has fallen. His K/9 is currently about 1.5 strikeouts per nine innings below his career rate. A 5.5 K/9 is still high enough for a pitcher to maintain long-term success, but clearly Mussina would like to miss a few more bats.

Mussina's declining strikeout rate means that he is allowing more contact. More balls in play typically means more hits allowed. That said, Mussina seems to be giving up a disproportionate number of hits, given the number of balls in play.

Given that Mussina's strikeout rate has fallen by ~1.5 K/9, you would expect some increase in hits allowed. However, Mussina is giving up almost 3 more hits per nine innings than before, which seems too high.

If you look at Mussina's Batting Average on Balls in Play (BABIP) for 2007, it is very high at .348, which indicates that Mussina has been unlucky. A greater percentage of balls in play than statistically expected have fallen in for hits. A .280-.290 rate is the average rate, so Mussina is well above that. Given enough time, that .348 rate can be expected to fall and his performance improve.

Another problem with his 2007 performance is his 63.5% Strand Rate, which is well below his career rate of 71.9%. If BABIP is a measure of how many balls in play will fall in for hits, then Strand Rate is a measure of how those hits are distributed. Obviously, clusters of hits will result in more runs allowed than a more well dispersed pattern. Mussina has suffered from both poor hit luck and poor distribution of those hits in 2007, neither of which is really attributable to him.

All things considered, Mussina's biggest problem in 2007 has been his poor luck. Of course, his declining strikeout rate ensured that his season wouldn't be as stellar as his previous seasons, but his peripheral stats do not support an ERA of 5.53 and a WHIP of 1.49. Given those peripheral stats, he should have better overall numbers.

If you look at his pitch data, his 2007 season has seen him throw a similar amount of both strikes (66%) and first pitch strikes (64%). He's also been consistent in the types of counts in which he has worked, as 2% of the Plate Appearances he has seen have been 3-0 counts and 19% have been 0-2 counts. All of those rates are in line with his career performance, but the one statistic that stands out is his Contact Rate.

This season, Mussina has just been more hittable. He is getting fewer swings and misses than in years past. In 2007, when batters have swung at Mussina's pitches they have made contact 86% of the time. This is up from 81% in 2006 and an 81% career average. It is difficult to be successful in the majors if you aren't missing more bats than that, so it is cause for concern.

However, the increased contact rate could be do to nothing more than the hamstring problems that have plagued him this season. His injury problems could be preventing him from getting the leg drive he needs to get good velocity on his fastball or the same snap on the breaking ball. Also, Mussina would likely see a reduced contact rate in switching to the NL, so that would be a benefit. The higher contact rate is a bit of a concern, but it also could be a statistical outlier and Mussina's track record may warrant taking that chance, especially if he isn't suffering from any injuries.

So, if the Reds could use Mike Stanton and his contract to reduce the amount of money and the inherent risk in acquiring Mike Mussina. If the Reds swapped Stanton for Mussina, then they would save around $3.75M on Stanton, which would reduce their net salary obligation on Mussina to $7,250,000 for 2008. Given the contracts handed out to free agent pitchers last offseason, $7.25M could be a bargain for a pitcher of Mussina's caliber.

By lowering the amount owed to Mussina in 2008, the Reds would also be reducing the inherent risk that he won't provide the amount of production needed for his salary. The lower the salary, the more likely the Reds will get their money's worth out of Mussina.

Mussina would also benefit from such a move.

Given the needs of both teams, this might be a deal worth considering. The offseason free agent starting pitcher pool is weak and the Reds may need to look elsewhere to fill out their rotation. The Yankees have three young starters in Phillip Hughes, Joba Chamberlain, and Ian Kennedy who could be ready to fill out the rotation with Andy Pettite and Chien-Ming Wang in 2008. Accordingly, they may not have much need for Mike Mussina. However, the Yankees could be interested in fan favorite Mike Stanton as a situational lefty to help them out in October.

Mike Mussina does have no trade protection, but if he isn't in the starting rotation for the Yankees, then a trade is the only logical option. He may need some convincing, but maybe Cincinnati could be the place he'd call home in the future.

All in all, it may be a deal that would be worth considering for both sides. It'll be interesting to see what happens to Mussina as the waiver trade deadline approaches, but a 1-2-3 of Harang, Mussina, and Arroyo could be a big improvement in Cincy in 2008.

It all depends on risk and Mussina seems to be a lesser risk than throwing ~$10,000,000 at a league average starting pitcher in free agency.