Jayson Werth has long been one of my favorite undervalued players in baseball. The common thread running throughout these undervalued players is that they have some flaw upon which the market focuses. The flaw drives down the value of the player past what his other attributes dictate that it should be.

Th flaw in Jayson Werth is his inability to stay healthy, which can actually be one of the more desirable flaws, as it may not require the player to make any changes to his game. As odd as it sounds, flaws can be desirable for smaller market teams. They can be "something devoutly to be wished", as they can create opportunities for bargain hunting.

In fact, getting more production per dollar spent is the big key to the success of the smaller market organizations. If the A's get the same amount production per dollar spent as the Yankees, then the A's lose because of the far superior financial resources of the Yankees. The A's and all smaller market teams have to develop talent and find bargains.

As for Jayson Werth, I shudder to think what value the market would place on him if he could stay healthy. To me, Werth is a unique player, because his game grades out very well in both traditional scouting and statistical analysis. Adam Dunn generates so much discussion because his production flies in the face of traditional scouting, which wouldn't rate him very highly.

Traditional scouting focuses on the process (mechanics, body type, etc), while statistical analysis focuses on the outcomes of that process (HRs, strikeouts, walks, etc). Both techniques are designed to determine a player's value and likelihood of success at the next level, but go about it in very different ways. At the nexus of these two different paths sits Jayson Werth.

Werth is 28 years old, 6-4, and 210 pounds. Werth has great tools, including a very strong arm, good speed, the projectible body type that scouts like, light-tower power, and the pedigree (he's the grandson of Dick Schoefield). At the plate, Werth possess a quiet stance and a smooth swing. In short, Werth looks good playing the game. He's a natural out there.

Werth's throwing motion is a bit of a short-arm, but that's because he came up as a catcher and he certainly seems to have the high baseball IQ of a catcher, as he is a very good percentage player.

Personally, I'd recommend checking out the following link and watching a few of his highlights under the multimedia section. (Jayson Werth video highlights)
In addition to how he goes about playing the game (i.e. the process), Werth also provides several intriguing outcomes. From a statistical perspective, there is much to like about Werth. 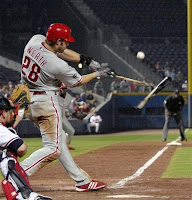 His career line of .257/.346/.431/.777 also indicates strong on base skills. His career Isolated On Base percentage (OBP-BA) is 0.089. Given what he has done during the extended periods of time when fully healthy, Werth could consistently post an OBP that is .100 points higher than his batting averge.

Werth also has tremendous power, which he hasn't demonstrated very often due to his injuries. That said, when he was healthy in 2004 with the Dodgers, Werth hit 16 homeruns in 290 ABs, which works out to a homerun every 18.1 ABs. For comparison, on his career, Adam Dunn has hit a homerun once every 14.0 ABs and Ken Griffey, Jr. is at one homerun every 14.8 ABs.

In addition, his career secondary average is .315, which works on the same scale as batting average and attempts to measures the value of the production provided by player. 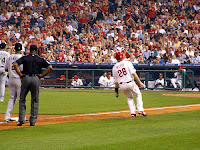 For his career, Werth has stolen 19 bases and been caught 4 times in his career. That's an 83% success rate, which is very impressive. He's fast for a tall player and intelligent on the bases.

While he has been very strong in leftfield and rightfield, he would likely be above average in centerfield as well. In John Dewan's Fielding Bible, Werth fared well in all three outfield spots in 2005 for the Dodgers, when he was well above average in each slot. 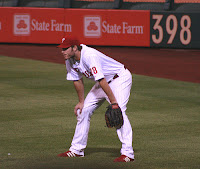 While Werth has long been one of my favorite undervalued players, he may no longer fit under that label if he continues to play like he has in 2007. Werth has seen increased playing time with the Phillies due to the injury to Shane Victorino and he has made the most of his opportunity.

Earlier this week, Werth went 9 straight ABs with a hit. He had a 5-for-5 game and followed it up with a 4-for-4 game. The NL record for consecutive ABs with a hit is 10, but Werth's 9 AB streak was ended by the crafty Tom Glavine.

Werth seems to finally be healthy, but now he just needs to stay that way. If he can do so, then he's likely to have a strong MLB career.
Posted by Lark11 at 9:47 PM